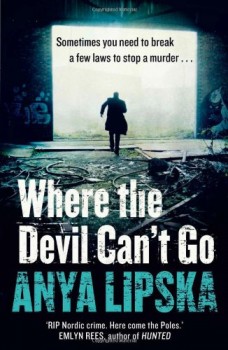 Where the Devil Can't Go

It had to come. Britain’s Polish community has produced its first author and its first thriller. And it has been well worth waiting for. Janusz Kiszka, an unofficial ‘fixer’ for East London’s Poles – many engaged in building the Olympic venues – is everything you could want in the hero of a good, old-fashioned thriller, and everything his countrymen would like to present as the face of their country.

Charismatic, rugged, tough even, he has a sentimental side which constantly threatens to break through. Surprisingly well educated, equally at home in a back street boozer or the embassy, he is by turns raucous, thoughtful, impulsive, calculating, moral and not above bending the law. As one of the first arrivals he is now as much English as Polish and is frequently torn between seeing things as a migrant and a native and providing a unique mirror image view of immigration and multiculturalism. All in all, he is a thoroughly believable and likeable character.

Like many of his countrymen Janusz is Catholic – although hardly practising. His well-connected priest persuades him to track down a missing girl – and he finds himself embroiled in a murder which seems to be linked to a ring dealing in the fatally dangerous counterfeit Ecstasy substitute PMA. His investigations lead him back to Poland, where the country is on the brink of a crucial election – and he must face the grim truth of his own past under Soviet domination through their puppet secret police, the SB, and the fact that many now see him as an outsider. In a country with Poland’s troubled history, politics and religion are never far away – and Janusz is dragged increasingly into both as the clever and unpredictable plot develops.

Janusz shares the story with Natalie Kershaw, a young detective frequently frustrated by the problems of a woman trying to make it in a still male-dominated force. Another forceful, but again believable, creation, she inevitably gets into trouble for not following the rules, but in general the police side of the tale is well-researched and well-paced and the interaction in the squad room – particularly her relationship with her old-fashioned and very un-PC sergeant – is as near reality as you are likely to get.

Several critics have compared Anya Lipska’s debut to the work of Ian Rankin and there are undoubted similarities, particularly in the injections of often fairly black or bawdy humour. But this well structured, vivid, absorbing and beautifully written piece is no rip-off. This is genuine top-quality crime fiction. The title alone tells you everything you need to know – the second part of the Polish saw is: ‘He sends a woman!’

Almost as strong and good as their vodka, this deserves to be a winner. ‘Szczescie jest pomiedzy ustami i brzegiem kielicha – happiness is between the lips and the rim of a glass’ is another Polish saying, so raise a glass to a major new talent.