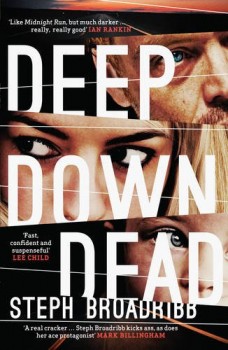 Bounty hunter Lori Anderson has to bring in another fugitive who’s skipped bail. But the first problem is the person she’s after is the man who taught her all she knows about the job. The second problem is that she has to bring him in with her nine-year-old daughter in tow.

Lori Anderson is a bounty hunter, skilled in bringing in anyone who jumps bail in Florida. It’s an unusual job for a woman, but Lori successfully manages to juggle the demands of her job with the pressure of being a single mother. And that pressure is made worse by the fact that she’s struggling for money and her nine-year-old daughter Dakota suffers from leukaemia. Lori needs money to ensure that she can keep paying the bills for Dakota’s treatment and the regular check-ups she needs.

When Lori is offered the opportunity to make some big money, it’s not a chance she can afford to pass up. The only problem is that the neighbour who looks after her daughter when Lori is on a job isn’t available. Lori has a choice to make; pass up the job, or break her own cardinal rule and take Dakota along with her. Lori is desperate for the money, so chooses the latter option.

The fugitive she must bring back in order to claim her share of the bounty is another complicating factor. She has to track down JT, the man who taught her all she knows about bounty hunting. She knows she can do it; after all, she knows JT better than anyone. But when she does find him, things start to go badly wrong, and Lori ends up on the run, with both JT and her daughter in tow, hounded by both the Miami mob and by the shady, powerful owner of one of Florida’s biggest theme parks, who’s running a very nasty side-line that he doesn’t want to have exposed.

Lori Anderson is the very epitome of a kick-ass main character, cut from the same cloth as Zoe Sharp’s Charlie Fox. Lori knows her business and she’s at the top of her game. But unlike Charlie, one thing Lori doesn’t want to handle any more is guns. She has enough demons in her own past not to want to add to them with any more deaths, but Lori’s backstory is carefully drip-fed to the reader and never threatens to overwhelm the present day narrative. Nor does it slow down the relentless pace, as Lori has to stay one step ahead of her pursuers as she attempts to get to the bottom of why so many people want JT dead.

Steph Broadribb’s debut is tough, stylish and very, very absorbing. I started the book one evening and had finished it by the following afternoon. I thoroughly enjoyed her picture of the attractive but dangerous Robert James Tate, known as JT. The tension between him and Lori is palpable, but never threatens the pace and style of this dark thriller. Lori hasn’t exactly been lucky when it comes to men, but she’s carved out her own niche in a tough world. Broadribb excels at the art of show not tell, and what she shows is a resourceful woman who, along with her creator, can hold her own in the traditionally male-dominated world of thrillers. There’s nothing insufferably cutesy about nine-year-old Dakota, either. There’s a lot of mileage in Lori Anderson as a character, and it’s good to know that this is only the start of a series.