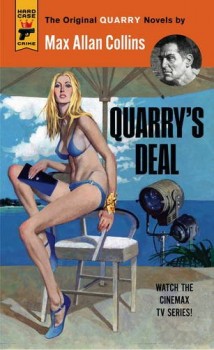 Quarry follows a killer from a steamy Florida singles resort back to his own territory. But this killer is a beautiful woman and the ex-Marine wonders if he may have met his match.

This is the third of the Quarry stories from the 1970s. Quarry is now in possession of former ‘agent of death’ The Broker’s list of assassins (Quarry’s List) and embarking on his self-chosen new career as a killer of killers.

This book was always Max Allan Collins’ favourite of the original four – and frankly, it’s mine, as well. The pace is a little slower than the near-frantic first two novels and it gives Quarry more time and opportunity to interact with other characters and allow us readers at least part of the way into his mind and to study his take on events.

The story opens in a steamy single women’s resort in Florida, where Quarry is watching the first of killers he has selected from the List, intending to offer the selected victim a chance of turning the tables – for a price. The problem is that the killer is a sloe-eyed beauty, as dangerous in bed as she is deadly on the job. As they become closely involved, Quarry begins to wonder if he has finally met his match.

He follows her to a casino in his own territory of the sober Midwest. As his suspicions harden, he identifies her target, a local businessman with former mob connections, but now an active campaigner against drugs. From thereon, it’s business as usual. There’s not much depth to the characters, but there’s not supposed to be in Quarry’s world.

The twist which makes this book stand out is that this time he is playing a rather uncertain detective trying to solve a crime before it happens. And because of his personal involvement he’s never quite sure if this lovely, but deadly, woman is playing him, or if he’s playing her. For a man without morals, he must also face the problem of whether he can kill someone he cares about.

Collins revisits his starting point of the American public’s treatment of often traumatised Vietnam war veterans – the spark for Quarry – and subplots involving drugs and mental illness which reflect outdated 1970s attitudes could perhaps have been developed further.

But that’s quibbling. This is still pulp fiction at its very best – fast, furious, brutal and black. And the question you’re all asking: Does he kill her? Read it and find out. Like all Quarry stories, you’ll enjoy the ride!