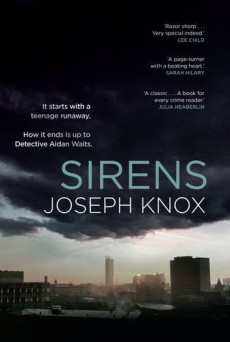 DC Aidan Waites is working undercover to expose a corrupt colleague in Manchester police headquarters when the job is complicated by runaway teenager Isabelle, whose powerful father expects Waites to protect her.

DC Aidan Waites is caught tampering with evidence and is given a choice: face prosecution, or take on a very dangerous undercover assignment to identify a rotten apple in police HQ. Reluctantly, he takes the job. His initial task is to get close to Zain Carver, who deals drugs through a number of bars and clubs he controls in central Manchester, and who has been suspiciously lucky in evading arrest.

Waites has not been long on the job when he is brought to see David Rossiter, MP. Rossiter is aware of Waites’ role and asks him to keep watch over his 17-year old daughter, Isabelle, who has run away from home. Isabelle is living at Carver’s house, Fairview, which he makes available for the girls who deliver drugs and collect cash, as well as being a regular venue for parties.

Waites manages to get an invite and talks to Isabelle. Exactly why a girl with her opportunities should get involved with a nasty character like Carver is unclear, but her past attempts at suicide suggest pressures not immediately evident. Meanwhile, Carver accepts Waites’ suspension at face value, and Waites is able to insinuate information which may lead the bent copper to expose himself.

Waites certainly gives a good impression of a man in disgrace, drinking heavily and popping speed in impressive amounts, while he hangs around trying to work out who is doing what in Carver’s organisation. He also sleeps with Catherine, another girl he meets at Fairview but knows next to nothing about. Progress is slow, but things get busy fast when a bad batch of Eight (heroin) comes on to the market, with horrific results.

This debut novel has several excellent aspects to it. The grime and sense of incipient violence is well conveyed. There are some horrible characters circling the scene, particularly the burnsiders, who may have been responsible for the disappearance of one of Carver’s girls a decade ago. The plot is complex, with plenty of twists and unexpected developments, and although some of the workings struck me as obscure, the whole hangs together in a convincing fashion.

For a large part of the book Waites’ character and effectiveness as a detective seem dubious. Waites is haunted by the trauma of being placed in care at a tender age, with a younger sister from whom he consciously distanced himself for her benefit. The sister makes contact, but Waites resists; he feels more comfortable pacing the grubby urban streets where he feels at home.

I got the feeling that at times the narrative could have gone in a number of directions, but this perhaps helped to sustain the sense of doubt about the final outcome until the final pages. This is an impressive debut novel that will especially appeal to fans of urban noir.