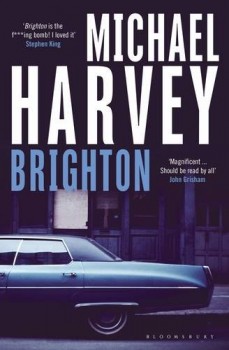 Pulitzer Prize–winning journalist Kevin Pearce learns an old friend is prime suspect in a string of murders. He heads home to protect the secret they share and face both an elusive killer and his own conscience.

With shades of Dennis Lehane, Michael Harvey switches his locations from Chicago to his home town of Boston to produce a dark, dense melange of criminals, drugs, gamblers, cops, lawyers, and reporters that grabs you from the off.

“You came back here to bury your past...Thing is, you gotta kill it first.” That’s the blunt advice to Kevin Pearce, teenage baseball starlet, top of the student pile in the working class neighbourhood of Brighton.

Kevin left town in the back of his uncle’s cab 27 years before. He and his friend and mentor Bobby Scales had just killed the murderer of Kevin’s grandmother. The streetwise Bobby stays to face the half-hearted investigation by an almost entirely white police force into the shooting of a black petty robber and drug dealer.

That’s how things are done in Brighton. You do what you have to survive. Violence and violent death are part of the fabric of poor working class 1970s America where race and nationality is far more important than honesty and justice.

Kevin fulfils his promise and returns a quarter of a century later as a Pulitzer Prize–winning reporter for the Boston Globe. But in Brighton, things never work the way they’re supposed to. When he learns his old friend Bobby, now a prominent street bookie, is prime suspect in a string of murders, he rushes to protect him – and the secret they share. To safeguard those he loves, he must face not only an elusive killer, but also his own conscience.

Brighton is a slow-burning powerhouse of a thriller, much of it written in the Brighton vernacular. The first third introduces the reader to the main characters leading up to the events in 1975. Once it moves into the 21st century, the pace picks up and works through the gears.

It’s a complex and riveting picture of a working class Boston Irish neighbourhood, sibling relationships, and Catholic upbringing. It is also an exploration of promises broken, debts owed, and old wrongs made right, whatever the cost.

Harvey manages to tie together all the events and characters to make Brighton one of the most intriguing and fascinating portraits of the darker side of a major American city. Boston then and now seems to have changed little – the houses are newer, the crime, deprivation and poverty continues.

A strong cast of well-drawn supporting characters, including Pearce’s sisters, his fatalistic and opportunistic childhood friend Scales and a laconic mob hit-man, make this a powerful, occasionally moving, story.

Harvey deliberately obscures the main storyline with some clever writing. It takes careful reading to work it through, until it all unravels in a few shattering final paragraphs. Nevertheless it’s a great insight into working class American life, a great read in the tradition of Lehane and others – and well worth the attention of the more serious reader.