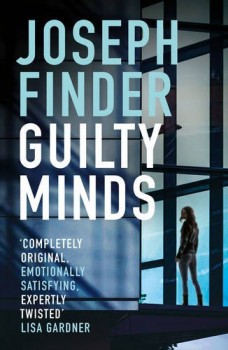 An on-line scandal sheet threatens to publish a story about a Supreme Court justice and a prostitute. PI Nick Heller has to show the judge has been framed before the story goes live.

PI Nick Heller runs a small office out of Boston with a pierced and tattooed office manager and Dorothy, a technological adept. He receives a request to meet Parnell, a senior figure in Washington DC, who tells him that Slander Sheet, a gossip website, is intending to publish a story that a named Supreme Court justice had a regular arrangement with a prostitute. Parnell asserts that the judge has been framed, and asks Heller to find the evidence to prove it.

Heller sets to work and soon comes across evidence that the story is a set-up. He also discovers that someone is attempting to frustrate his efforts. His phone and laptop are stolen. The girl is in hiding; he manages to find her and arrange a meeting, but she is under the ‘protection’ of a dubious minder, and appears frightened. Some of the people involved prove to be very dangerous, leading to a few exciting confrontations before the end of the book.

Finder seems to be particularly good at devising plots with plenty of intriguing twists and turns, and this book exemplifies the appeal. Clever exploitation of technical methods generates successive revelations about hidden machinations and who is behind it all. Bits of action punctuate the explanations and emphasise the risks involved.

To someone who has difficulty working a mobile phone, I have to say that the amazing information-gathering possibilities available to Dorothy and those with her level of expertise appear rather like magic, and I freely confess taking them on trust. They certainly transform the life of the private investigator; the implications of Finder’s narrative are that it is effectively impossible to conceal information if you know how to recover digital data, and have a few bent contacts to get you access.

Ultimately, however, the book fails to convince. While you are being carried along by the action, the plot is plausible, but considered soberly the bad guys are sometimes a little too clever and sometimes not too bright. At one point they tie up the protagonist, promising to come back and deal with him later; don’t these people ever watch James Bond?

The other difficulty is that although Finder tries to flesh out the characters, the action leaves little time for it and most come out as two-dimensional. I did like Ellen Wiley the tobacco heiress, unreconstructed snob and bigot, but most of the other actors were a bit thin and subservient to the plot. Guilty Minds is a perfect book for a long plane flight, maybe, but not a book you’d be bothered to keep.