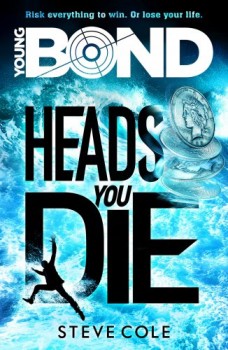 James Bond and his friend Hugo have to go up against Scolopendra Industries to save the life of a family friend.

Heads You Die is the second book by Steve Cole in the Young Bond series and the seventh overall, with the earlier ones written by Charlie Higson. The book starts with a rip-roaring prologue as a daring thief tries to make a getaway with something of value from Scolopendra Industries and with a name like that there’s no prizes for guessing they are up to no good!

James and his friend Hugo are on their way back to England via a stopover in Cuba after their exploits in Shoot to Kill. James is as much of a trouble-magnet as he ever was, and the main action starts immediately with James trying to recover his wallet in a chase with a pickpocket. He succeeds, but immediately plunges into danger again when he sees a teenage girl being grabbed by a couple of thugs, James promptly gets stuck in, even though his chivalry pits him against El Puño - the Fist - a man with a granite hand. The girl escapes but James knows he’s made an enemy of El Puño.

The two boys are in Cuba to spend some time with Gerald Hardiman, an old friend of James’ father. Things don’t seem entirely right with Hardiman, who’s clearly troubled by contact with a rich local industrialist, known by the nickname of Scolopendra, which comes from a species of giant centipede that he found and named. The game of spot the baddy is never hard in any James Bond novel and it’s nice to know some things don’t change.

When Hardiman is kidnapped from his house, the two boys are determined to rescue him, even if, as ever, it means going up against overwhelming odds. Head You Die is as fast, clever and fun as ever, and Cole has proved himself a worthy successor to both Charlie Higson and the late Ian Fleming.

The role of the now obligatory Bond girl is taken by Solopendra’s daughter, Jagua. She’s every bit as tough and resourceful as James himself, following in the footsteps of a line of feisty heroines in this young adult series that is still managing to go from strength to strength. Hugo is an excellent foil for James. There is no attempt to play his lack of stature for laughs. Hugo has a good heart, a generous nature and never lacks courage, and on this occasion, it looks like he’s the one to get the girl, too.

The plot is as dastardly as ever, and the stakes are high. Both boys stand to die if they don’t win, but the odds seem almost insurmountable. For explosive action that always stays just on the right side of being believable, few series can beat Young Bond. Cole doesn’t shirk from a few stomach-churning passages, either, so be warned! I’m not enough of a Bond buff to catch all the small homages to the original books, but I do know that they capture the tone perfectly, and in all his adventures, you can catch a glimpse of the man young James Bond will become.