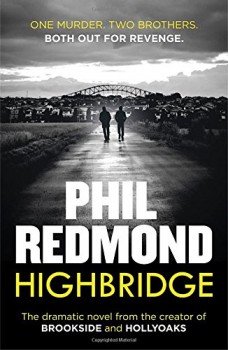 Janey Carlton has been killed by her own car, stolen by a junkie mugger. When her murder remains unsolved after three years, her brothers and her widower set out to gain revenge.

Phil Redmond made his name and fortune as creator of those long-running TV series Grange Hill and Brookside, 30 and 21 years respectively, and Hollyoaks, still going after two decades. All three to some extent examined topical, provocative issues in urban communities divided by generational and social tension.

Now, at the age of 66 and after a spell in the charitable and educational sectors, Redmond makes his debut as a novelist, with the promise of a series set in a fictional northern town.

This is more an unlikely state-of-the-nation account than a crime story, although drug dealers, child groomers, extortionists and killers all feature. It’s jerky, full of info dumps, capsulated character sketches and multiple storylines each building to end of chapter cliffhangers – which substitute for TV ad-breaks – suggesting that it might make a decent six-part series rather than book.

The cast includes a brief appearance by a senior policewoman, who does nothing to solve any of the crimes which frame the story and whose peripheral involvement appears merely to highlight Redmond’s main thrust, the failure of the ‘war on drugs.’

Three years before the action begins, Janey Carlton is killed by her own car, stolen by a junkie mugger. Her widower, discharged Army sniper Luke, has become a mercenary in reaction to her death. One of her brothers, Sean, runs a drugs awareness scheme. The other, Joey, more given to direct action, takes construction jobs in London to ease the pain. These male characters dramatise alternative way of dealing with the narcotics problem – vigilante action or education and rehabilitation. Plot twists highlight the temptations and limits of each.

It’s all very visual. Redmond is almost a producer, seeing key moments through a rifle sight, interspersing action with scenes of making coffee or driving, a device which would allow screen edits. It’s also full of inconsistencies. How Luke and his ‘spotter’, ex-Army buddy Matt, manage to acquire and conceal a massive Barratt M82A1 sniper rifle, tripod and ammunition is conveniently not addressed. Just like a TV drama, it’s there, move on to the next scene! Their extensive military experience doesn’t fit the story. Kosovo, Iraq, Afghanistan and Somalia span too great a time and how many PTSD-affected veterans occupy downtime while waiting for a killing in philosophical debate?

A minor point. A local’s accent is described as pure Scouse, but, as Highbridge has a mediocre football team, surely it can’t be on Merseyside! It’s uncertain into which genre this story falls. Part techno-thriller, certainly no whodunit, part fulmination against targets including education, unemployment, social media, the pub industry and environmentalism serve only to confuse. All are things you can get away with in on-screen conversation, but in what is essentially a simple story, these contemporary issues detract.

If Redmond and Highbridge are to succeed in print he needs to define and refine his product. The prologue is brilliant, the denouement unlikely and weak. Overall, the book is very hard to get into and difficult to follow. Redmond is a fine scriptwriter and I can see this working well on the small screen. He should have stuck to TV!