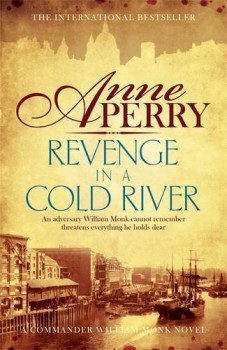 Revenge in a Cold River

Commander Monk is called to look at a corpse that has been fished out of the Thames. Not only was the man drowned but he had also been shot in the back. Why is it so important for Monk to investigate?

McNab of the Customs Service calls Commander Monk, Chief of the River Police, to look at a drowned body that has been fished from the Thames. When Monk finds a bullet hole in the body’s back he begins to suspect that McNab has ulterior motives. Would they be related to some forgotten event in the past?

The body was that of an escaped prisoner, so when another supposed criminal escapes from customs Monk decides to try to catch him, with disastrous consequences. The chase takes place near the warehouse of a very wealthy American trader whose wife has her own agenda about crimes of the past in America. Questions arise as to whether Monk ever visited America, why two-masted sailing ships feel so familiar to him and whether he will ever rediscover his past.

Commander Monk novels never fail to impress with the way in which they conjure pictures of a cold, damp Victorian London: the cold, dark, river; the fear in the dark, foggy streets; Hyde Park with its walkers and riders in their fine costumes; the open fires in the society living rooms; and the everyday wholesomeness of the houses of those such as Monk. There is a tremendous sense of place across the whole gamut of society. Most impressive of all is the way in which the poorer areas around the river are painted so richly just in sound: the shouts, creaks, thumps, slurps and clanks of men unloading the ships.

These descriptions are so evocative and run in parallel with a similar approach to the way in which the author writes about the people in the novel. The style of writing teaches us about the characters through engagement with their thoughts and feelings. Even here the emotions are often shown through actions. For example even a dropped jug of milk indicates just how stressed Monk’s wife Hester is at some point.

The characters have such depth as events from previous books and past times are discussed and contribute to their current states of mind. Indeed, past events and memories are constantly reviewed and analysed as a way of gathering evidence for the current crimes and disasters. Much of this analysis is done through dialogue. The reader has to concentrate really hard to follow the thread at times which makes the book completely absorbing.

In addition to the complex plot and the wonderful descriptions, a number of interesting and topical issues are embedded into the story, many concerned with women: Hester’s refuge for women who would find themselves on the streets; the often hidden abuse of married women; women’s self-respect is analysed and reasons sought for some men’s expectation of them in a submissive role. But this isn’t overly discussed. Instead it is once again cleverly woven into the action as with everything else. The book makes for wonderful, comfortable yet challenging reading and is a real treat.