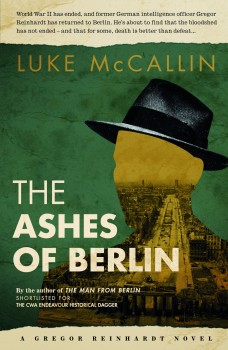 The Ashes of Berlin

Inspector Gregor Reinhardt, back in Berlin after the war ends, must track down a serial killer, but his investigation is interfered with by the political interests of the occupying powers and a group of ex-Nazis.

In the aftermath of Hitler’s defeat it is a very different Berlin. The bombed and shelled ruins are a hotbed of crime. Theft, assaults, rape, extortion, black marketeering and corruption are everywhere. Gangs of feral orphaned children roam the streets, like much of the population struggling to stay alive amid poverty and starvation. Berliners will do almost anything for food, cigarettes, alcohol and other goods and favours from their conquerors.

The four occupying powers in 1947 Berlin, wartime allies, are now at each other’s throats – each trying to bolster their own influence while competing in a race to salvage ‘what shines in the rubble’ – particularly scientists and other high value functionaries, no matter what they may have done under the Nazi regime. Justice takes second place to realpolitik and at best is a chequered affair, constantly compromised by the demands of the Big Four players.

Reinhardt has regained a post in a Communist-dominated ‘kripo’ through the influence of his American backers, but is a target of contempt for the many new, young and far less experienced, Russian-appointed detectives. He is assigned to two murders in the scarred Neukolln suburb – one a military war crimes lawyer working for the British, the other a Luftwaffe veteran – and falls foul of big power interference from the start of his investigation.

The killings, obviously connected, are separated. A twisted trail of political intrigue and danger draws in a mysterious, but powerful, Russian intelligence officer and a group of die-hard Nazi sympathisers. With all sides demanding his allegiance, Reinhardt must steer a way through this maze as best he can. But when more murders follow it becomes clear the victims are linked to a Luftwaffe group and an incident in North Africa – and that there is a skilled, chameleon-like killer seeking his own justice.

This superbly researched and atmospheric multi-layered tale of war, political upheaval and hope impressively captures a crucial period of Berlin’s history. A detailed, engaging and completely believable plot and clever characterisation draws the reader into the emotional depths of Reinhardt’s world. He is a complex and conflicted individual, deeply affected by the death of his wife and his own experiences on the Eastern front and uncertain how to deal with his Nazi son, suddenly released from a Russian POW camp.

He seeks redemption through work and is relentless in his pursuit of the killer despite constant obstruction from colleagues or superiors bowing to outside pressures, and his personal and ethical doubts add subtlety and momentum to the story line. All the key participants have enough blurred edges and contradictions to make them both fascinating and realistic and the pace and structure makes this a compelling read, with the ruined city and its people a key part of the story.

This is historical fiction at its best, although to anyone immersed in detective writing, the killer is pretty well-telegraphed. But he’s not really the focus. McCallin’s writing is sharp and beautifully observed, at times graphic, dark, brooding and raw. Reinhardt is a thoroughly engaging protagonist whose melancholy cynicism adds to an impeccable feeling of time and place.

After three bloody and brutal stories set in the war and its aftermath, it’s hard to know where he’ll go from here. McCallin, a believer in cliffhanger endings, gives a massive clue in the final line. With Germany’s remarkable – if often troubled – recovery to become the powerhouse of Europe, I, like any reader who has been fascinated by these brilliant novels, hope this is not the last we see of his enthralling creation.