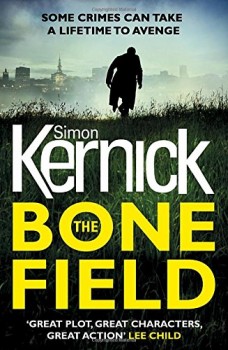 The discovery of the bodies of two murdered women, one of whom went missing in Thailand in 1990, opens two cold cases that soon become very hot to handle.

Kitty Sinn, aged 21, went missing in Thailand in 1990, so when her bones are discovered next to a posh boys’ boarding school in a field that’s been sold off for development, it comes as something of a surprise to everyone, particularly when the bones of another young woman who disappeared locally some years are found nearby. It’s clear both were murdered, but what’s not clear is how Kitty got back to England from Thailand without being seen.

Ray Mason, now demoted to the rank of detective sergeant after leaving rather too many bodies in his wake, gets involved when Kitty’s boyfriend at the time of her disappearance contacts the police and says he has new information on the case. A meeting is set up with Henry Forbes and his lawyer, but before he can tell Mason what he knows, two masked gunmen kill them both under Mason’s nose. Two more bodies on his already blemished record isn’t a good start for Mason, but after a visit to the parents of Dana Brennan, the local girl whose body was found near Kitty’s, Mason is determined to bring their killers to justice.

In The Bone Field, two of Simon Kernick’s long-running series characters finally get the opportunity to meet when former maverick cop-turned-private investigator, Tina Boyd, teams up with Ray Mason. Neither have them have much – if any – respect for authority, and are quite prepared to drive a horse and cart through any regulations if it gets them a result.

Mason’s ‘talk to the camera’ first person narrative progresses at Kernick’s usual brisk pace, as do the third person chapters from Boyd’s point of view, and the shifts between them are rarely awkward. I could have done without the early pet death, but then when a dog gets introduced into any crime book or thriller, it rarely reaches the end credits, much to my annoyance.

Mason is still as much of a trouble magnet as before and in that respect, he makes a good pair with Boyd, as trouble with a capital T is Boyd’s middle name. The characters around them aren’t burdened with too much of interest, with only brusque DCI Olafsson standing out in any way, and not too much is made of Mason’s own troubled history. The same is true of the villains of the piece. We know they’re nasty because one of them killed a li’l doggy, but beyond that, there’s probably more tell than show

The Bone Field is a very serviceable police thriller providing a welcome break from Kernick’s habit of using unreliable narrators, which is something that needs to be used sparingly, as otherwise it was in danger of turning him into a one-trick pony, and Kernick at his best is far from that. This book never quite hit the adrenaline fuelled heights of books like Siege, but it’s a good, solid page-turner that provides an outlet for both Mason and Boyd’s talents. There’s certainly not a dull moment when either of those two is around.