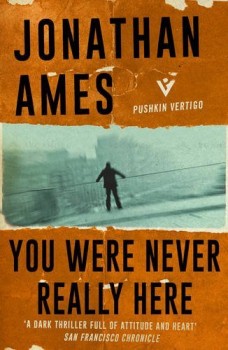 You Were Never Really Here

Joe, a former FBI agent and Marine, is a gun for hire. He’s employed to rescue a senator’s daughter from a Manhattan brothel, and stumbles into a deadly web of conspiracy.

Ames’ fast-moving, minimalist style, a brutal pragmatism reflecting the personality of his protagonist, is reminiscent of Raymond Chandler at his best. But ex-Marine and FBI agent Joe carries on where Philip Marlowe would have signed off with a quip, a drink and a blonde. There’s no glamour like that here. This taut, character-driven story races along under the constant shadow of death and despair.

Joe’s abusive childhood and subsequent events in his military and FBI service have left him psychologically damaged beyond repair. He now freelances for a shady agency which handles illegal tasks for major security or law firms. His speciality is rescuing girls kidnapped into prostitution. He has been hired to recover the daughter of a New York senator, held in a Manhattan brothel, but is caught in a deadly web of conspiracy, featuring corrupt police, organised crime and rampant political ambition.

As the body count mounts, Joe a complete loner who allows no-one into his life, pursues his dark and violent task with a grim determination, his favourite weapon – a hammer – and a frightening ruthlessness.

You Were Never Really Here is darkly disturbing in its realism, and the only disappointment is that it ends too soon – just as Joe accepts the motivation of a new project, to destroy those responsible for the chain of events which has severed him from the few people he could even relate to. Will he return to finish the task? We are more likely to see him on screen first. Humphrey Bogart was the ideal Marlowe, but could never have made Joe believable. Pity Clint Eastwood is too old, but we’ll see what Joaquin Phoenix makes of the role.

Ames is best known in America for the comedy detective HBO series Bored To Death about an inept amateur sleuth and his friends. But after this brilliant and stunningly noir piece of writing, the future direction of his work now seems clear.