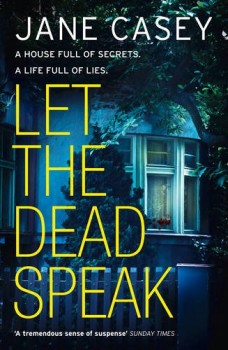 A young woman returns home to find her mother missing and the house covered in her blood. Newly-promoted DS Maeve Kerrigan has to deal with both a murder inquiry without a body and abrasive DI Josh Derwent.

Eighteen-year-old Chloe Emery’s parents are divorced and not on good terms. Chloe has been staying with her father and his unsympathetic, unpleasant wife for a few days, but leaves early, to return to the home she shares with her mother in Putney. She walks into to a nightmarish scene. The house is covered in blood and her mother is nowhere to be found.

Newly-promoted DS Maeve Kerrigan is called to the scene and, from the amount of blood in the house, the murder team find it hard to believe that there’s any chance of finding Kate Emery alive. A search of the local area proves inconclusive and a police dog fails to track the missing woman for any distance. Chloe is taken in by neighbours, the obnoxiously religious Norris family, who clearly disapprove of Chloe’s friendship with their teenage daughter, Bethany.

It seems that everyone apart from Bethany is determined to treat Chloe as something considerably less than a functioning adult and, as the enquiry progresses, it comes out that the missing woman had been determined to attach a label to her daughter from an early stage, possibly as a means of continuing to extract money from her former husband. So far as the murder is concerned, there seems to be no immediate shortage of suspects, but there’s a definite shortage of a body.

Let the Dead Speak grabbed me from the first few pages. I’ve been a fan of Jane Casey’s Maeve Kerrigan series from the start, and one of its huge strengths is the gradual, wholly believable development both of her character and her complex relationship with the moody, abrasive DI Josh Derwent, a man who revels in being a pain in everyone’s backside.

Kerrigan, always intelligent and intuitive, is now starting to emerge from her mass of personal insecurities and is wearing her increase in responsibilities well, particularly in her dealings with DC Georgia Shaw, a fast-track graduate entry into the force, newly moved into the murder team, who soon proves to be something of a liability to her colleagues, particularly when a confrontation on the street in Putney turns nasty. Acting Superintendent Una Burt is heading the inquiry and is proving a force to be reckoned with. Her ability to deal with Derwent at his worst is always entertaining, and I hope we continue to see more of her throughout the series.

As ever, Kerrigan’s relationship with Derwent is at the heart of the book, and the ever-evolving complexity of their interaction is deftly handled. While Kerrigan is growing in confidence, Derwent seems more troubled than ever. He’s now together with a woman he helped in a previous investigation and dotes on her young son, but it’s hard for him to put out of his mind the myriad ways harm can come to people, and that’s affecting his ability to hold his relationship together. Like Kerrigan, I never expected to see Josh Derwent talk about his feelings! But when it happens, the glimpse we get inside the mind of the former-soldier-turned policemen is almost painful in its intensity, making it clear that there’s a lot more to Derwent than just a bad boy stereotype. For me, these two now form the best and most entertaining partnership on the crime scene.

I was delighted to learn that Jane Casey’s series has survived a change of publisher and will be continuing. She delivers consistent but constantly developing characters, complemented by ingenious plotting, matched by an unflagging pace. If you don’t know Kerrigan and Derwent, don’t let that stop you joining the party now. Let the Dead Speak is a well-rounded police thriller in its own right that gets off to a flying start and continues to a complex, satisfying conclusion.