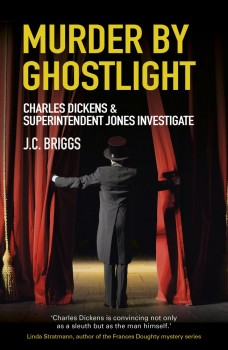 Journalist, social reformer, novelist and actor Charles Dickens returns to the theatre where he has been appearing to find a member of the cast shot dead and a weapon on the stage – and is arrested as prime suspect with a smoking gun in his hand.

For readers new to AJ Briggs’ series, the idea of the great 19th century novelist, social reformer, journalist and actor Charles Dickens as a detective may seem a bit far-fetched. It is a tribute to her style, so reminiscent of that of the man himself, that she makes an unlikely ‘buddy’ pairing of Dickens and Bow Street Superintendent Sam Jones not only engaging, but also surprisingly believable.

Both are from humble origins, both successful in their own fields, both now of that Victorian middle class which was beginning to see society’s dreadful inequalities – and determined to change them – and both widely read and able to indulge in that popular parlour game among their class of exchanging classical quotations.

This third in the series opens with Dickens being falsely accused of the murder of an actor in a theatre where they were both performing. His arrest allows the introduction of a new character in the shape of Inspector Hardacre of the Manchester police, a bulldog of an investigator who spares no one’s feelings, including Dickens, as he pursues the truth. Readers will be left hoping Dickens goes north again to renew his acquaintanceship with this balanced and three-dimensional character.

The plot, for all its twists and turns, is not that strong. There are perhaps too many coincidences as it builds towards a furious and tense finale. Dickens, though, is portrayed as an honest and open man tortured by the deprivations of his past, deeply affected by his first night in the cells, a self-contained man, but capable of strong feelings such as a real dislike for the dead man, and strong feelings towards a young actress, a reflection of reality where he left the mother of his ten children for an 18-year-old.

Into this Victorian setting, and with some truly Dickensian descriptions of the appalling poverty of the lower classes in both Manchester and London, Briggs introduces the modern concept of a sociopath; an individual shaped by events, harbouring a grudge until ultimately discarding conscience to achieve his goal.

Her descriptions of late Victorian Manchester are interspersed with anecdotal examples of the tragedy of slum life give authenticity to the story, but some readers may find them a distraction. So too, the many references to Dicken’s books and frequent exchanges of quotations, sometimes in the most unlikely situations.

But for me, this linguistic creativity, so like that of the master himself, made the book. Briggs has captured Dickens’ gift of caricature and sense of the ludicrous side of life. That, taken with the social comment, still as relevant as when he was writing, plus a modern plot, make this a story well worth reading.