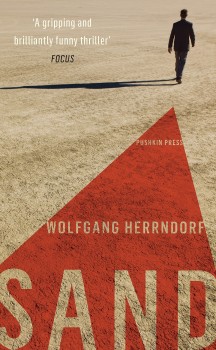 Following the murder of four westerners in an oasis town in the North African desert, a man without memory appears, trying to make sense of his location and the various groups pursuing him.

The North African coastal city of Targat stews under a punishing sun, and the 1972 French administration assigns detectives Polidorio and Canisades to a multiple murder in the nearby oasis town of Tindirma. The deaths seem clearly the work of one Amadoro Amadoro, who entered a commune complex and left with a case full of worthless East German currency. Both Amadoro and the money have since gone missing.

An American, Helen Gliese, is returning from Tindirma after checking on her friend Michelle, one of the survivors of the killing. A man approaches her at a petrol station, seeking help: he is suffering from concussion and has no idea who he is. All he can remember is escaping from a laboratory, and then being robbed of his wallet, so he has no proof of identity. Helen takes him back to her hotel bungalow and provides support; the man declines to involve the police, or even a doctor.

Shortly after, the man is apprehended by a group who seek the return of an unspecified article, and threaten the man’s wife and child if it is not produced within 72 hours. The man knows nothing of a family or the article. He makes investigations based on words he overheard at the laboratory, to do with a mine. But is this to do with explosives, or an excavation, or an even more obscure meaning?

The book proceeds by way of brief chapters, each commencing with a quote from such diverse sources as Herodotus and Nabokov which provide an amusing commentary on the narrative. There is humour to be found throughout the story: the complete lack of understanding in communications between the locals and the foreign interlopers, attributable to the irreconcilable concerns of the various parties, Michelle and her obsession with the tarot, in particular. Herrndorf in fact has a perceptive eye for such matters, and dissects the activities of his characters in a forensic, unsentimental manner.

Sand has undoubted literary merit and I enjoyed it, despite certain aspects of the plot being somewhat hard to make sense of, and the time taken to introduce the two detectives at the beginning who then largely disappear from the story. It certainly sustains uncertainty until the final pages, both for the reader as well as for the protagonist.