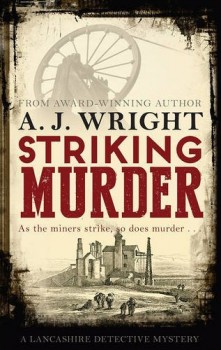 An unpopular mine owner is murdered at the height of a strike. Detective Sergeant Michael Brennan discovers that with a town full of suspects there are more questions than answers.

As the bitter winter of 1893 grips Lancashire, the coal and industrial town of Wigan is almost crippled by the effects of Britain’s first national miners’ strike. As strikers’ families face grinding hardship, wondering where the next meal or the next fire will come from, businesses, from small shops to iron and steel foundries, face bankruptcy as there is no money to buy food or coal for the furnaces.

As tension in the town grows, Arthur Morris, bullying owner of the most productive and profitable colliery, whose attitude and intransigence over miners’ pay is the major cause of the strike, is found brutally murdered in one of the town’s roughest working-class districts where he is universally hated.

Locally-born Detective Sergeant Michael Brennan is tasked with solving the killing of one of Wigan’s most prominent citizens, whose brother is the area’s MP. With a town full of suspects, and only a badly written and grubby note for a clue, he finds there are more questions than answers. Then a mysterious stranger is found bludgeoned to death on a frozen canal. Brennan, occasionally aided by the blunt instrument that is Constable Jaggery, suspects a link which will help him unravel a twisted skein of interwoven clues.

AJ Wright, a former English teacher, who lives near and clearly loves the book’s setting, lists two major interests – the Victorian era and the Golden Age of crime fiction. Here he combines the two brilliantly, evoking strong images of both the town and its people in a perfectly recreated late-Victorian setting.

His characters are developed with a great eye for detail and all very believable, from his protagonist, who because of his own background shows a perception and sympathy unusual in a Victorian policeman to a pair of star-crossed lovers from vastly different social classes and a charismatic demagogue of a strike leader.

This is an absolute gem of a historical crime novel – cleverly and intricately plotted, very well-written and convincingly evoking all the social problems of a late-Victorian industrial town and the devastating effects on it of the country’s first national strike.