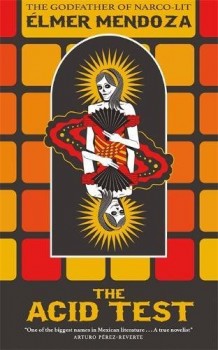 Detective ‘Lefty’ Mendieta is determined to find the killer of an exotic dancer, while around him the conflict of two rival gangs of narcotics traffickers comes to a head.

At the end of his first outing, Silver Bullets, Edgar ‘Lefty’ Mendieta met the very beautiful Mayra Cabral de Melo, a dancer who spread her favours around the well-heeled of Culiacan. Although his admiration was purely platonic, her murder at the beginning of this book provokes his rage and intense focus. Lefty interviews in turn aspiring politicians, senior members in the local narco aristocracy, visiting gringos and others who vied for the hire of Mayra’s body.

This exclusive attention does not satisfy Lefty’s bosses, and he is specifically warned off some of the suspects who have pull. Certainly there is plenty else which might merit his activity. Two rival drug gangs are tooling up for a showdown with the assistance of hardware from a visiting salesman. The father of the US president is visiting a local estate for a duck shoot, and opponents of the president’s policy of building a wall are on the warpath. And the ‘gangsta wraps’ steadily pile up.

Set in 2007, the book provides a picture of life in a city where the economy is dominated by the trafficking of marijuana, cocaine and heroin. The Mexican president has just launched a war on the trade, but nobody has any illusions. The huge amounts of cash generated percolate into all areas of life, casual murder has become commonplace, and no amount of pious pleading is going to change things.

Lefty’s survival in this environment becomes a delicate balancing act: acceptance of the obscenities of the narcotics trade, indeed having some kind of respect from the gangs as an honest joe, while rigorously pursuing the criminals that he can actually do something about. Recognition of his character gives him a certain licence with the gangs and his superiors, and the appreciation of his staff, including the feisty Zelda Toledo. This is a very macho culture and Zelda comes as a welcome counterbalance.

As observed with Mendoza’s first book, however, there are a few barriers to complete enjoyment for the reader. The lack of inverted commas make reported speech a problem: the frequent telephone calls are difficult to follow, especially when the speakers are not immediately identified. The cast is huge, and frequent referral to the five-page cast list supplied is difficult to avoid. Paragraphs sometimes exceeding two pages do not help. The translation is fine, but there are occasional passages where one suspects that the vitality of the original Spanish could not be fully conveyed.

One thing which does come across is Mexican cuisine; those who think Mexican food is limited to tortillas will be informed by the guide to the range of dishes and drinks enjoyed by the characters in the book. It all looks delicious, although training may be necessary to survive the chillies.