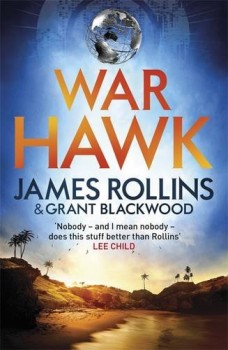 Ex-Ranger Tucker Wayne helps a former army colleague on the run from assassins hunting her and her son and enters a hi-tech world of conspiracy, obsession and murder.

To sum up the plot in one sentence: One man and his dog save the world – again!

Former Army Ranger Tucker Wayne and his war dog Kane are caught up in an improbable global conspiracy in this second Sigma Force spin-off adventure. It’s part sci-fi, part hi-tech reality, part historical, part an exploration of the future of warfare and part a madman’s ambition for world domination, all rolled up into a frequently bloody story which moves at breakneck pace across three continents.

Wayne is a dream hero. Wonder if the name’s a coincidence? Smarter than Bond, when necessary more brutal than Rambo, he represents what every American male would like to be – honest, decent, upright and patriotic, fighting his own PTSD with the same determination he once fought his country’s enemies. His constant companion and greatest friend is his ‘liberated’ war dog Kane, a Belgian Malinois shepherd, the highly intelligent and fierce breed used also used for the detection of explosives, accelerants and narcotics, tracking humans, search and rescue – and as guards for the White House! Kane, like Tucker, is a paragon of his kind, with more lives than the proverbial cat! But his ‘contributions’ to the story offer both a very different point of view – and relief from Wayne’s parade of virtuosity in every field.

The story, a combination of cyber war, terror and power-hungry conglomerate is well suited to the modern day world of greed and distrust of the ruling elite, but in parts surprisingly politically correct. The fractious mathematical genius, code-breaker and convicted homosexual Alan Turing, in many ways the father of the computer, is treated with near reverence and his theorising on artificially intelligent machines is the key to the story.

Even the villain, a mix of the worst of the buccaneering worst of the pioneering multi-millionaire American industrialists, Trump and Murdoch, who dreams of world domination through a combination of cyber and psychological warfare, is allowed a softer side. But while bandits and killers such as Billy the Kid or Butch Cassidy’s Wild Bunch are lauded as American heroes, the great Apache war leaders Cochise and Geronimo are dismissed as ‘notorious’.

Tucker and Kane are on holiday in Montana. Then a woman from their past turns up at his motel with her son, on the run and desperate. She had been working in one of several teams on a heavily classified project. An old friend of both has disappeared and several colleagues have died in ‘accidents’, but she is convinced they were murdered and that she is next on the hit list.

So begins a breathless chase across America, Europe and the Caribbean, with the distinction between hunter and hunted blurred as Tucker puts together a small group of former military and intelligence operatives.

With no one to trust, they are forced to break the law, expose secrets, and risk everything to stop a madman determined to control future warfare for his own ends. The action is non-stop and totally improbable. No one could possibly survive a series of knife and gun attacks, tank assaults and napalm, let alone aerial assaults from drones, drones and more drones, each successively more deadly.

Despite all that this is a brilliantly written thriller which drives the reader on if you’re looking for something entertaining, not too serious but with enough fact thrown in to keep it – just – on the verge of the possible.