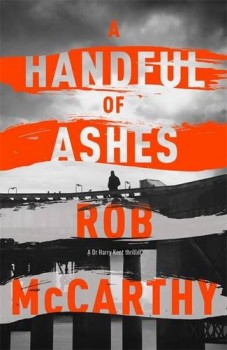 A Handful of Ashes

When a notorious whistleblower is found dead, she appears to have taken her own life, but force medical examiner Dr Harry Kent isn’t convinced things are as straightforward as that.

Dr Harry Kent works as a force medical examiner for the Metropolitan police, which means he gets called on at all hours to attend the police station if a medical opinion is needed. On top of this, he puts in long and gruelling shifts in A&E, and is also doing his best to track down information about a young woman who was attacked during the London riots and left in a coma.

Harry’s already over-burdened life gets worse when he’s called out by the police to the scene of an apparent suicide. The dead woman is sitting in a chair in the middle of her flat, deep wounds in her arms and blood pooling around her on the floor. Something about the scene strikes Harry as not being quite right, but he’s distracted by the presence of the senior investigating officer, acting DCI Frances Noble, who also has the dubious distinction of being Harry’s ex-girlfriend. They split up when Harry could no longer cope with her addiction to alcohol, but the tables have turned now as Frankie Noble has been dry for the past six months, whereas Harry is now mainlining amphetamines to get him through the day.

Matters become more complicated when it is revealed that the dead woman, Susan Bayliss, a registrar in cardiothoracic surgery, had been suspended from her job at the Belgrave Hospital for children after blowing the whistle on her boss, a top heart surgeon. She had accused him of being reckless in a series of high-profile operations on young children who subsequently and inexplicably died following surgery. As a result of her accusations, Bayliss ended up being suspended from her job, and it seems likely that the stress of the investigation, coupled with the hospital administration’s attempts to discredit her testimony by calling her mental health into question, led to her inability to cope.

The surgeon, Elyas Mohamed, vigorously denies any malpractice, as does the hospital administration, but Harry is convinced that Bayliss’ death is inextricably linked to the cases of the dead children and, against his better judgment, he ends up getting sucked into another of Frankie Noble’s investigations.

Rob McCarthy is a pseudonym for a London medical student, and his detailed background knowledge positively leaps off every page, from the efforts the hospital teams make to bring someone back to life to a gut-churning description of an emergency open heart procedure being performed with minimal equipment on someone’s living room floor after an unexpected attack on a police officer. If Casualty and Holby City are your cup of tea, then this is the series for you. McCarthy combines police work and medical detail into a seamless whole that drags the reader through the story at an ever-increasing pace.

Harry’s dealings with Frankie Noble are as prickly as barbed wire, but his inability to stay away when she calls isn’t going down well with Harry’s long-suffering girlfriend, Beth, who is constantly playing second-fiddle to her boyfriend’s various obsessions. When Beth discovers the true extent of Harry’s addiction, she’s desperate for him to make the effort to get clean, and so is Harry – in theory. But the practice proves very different. Harry’s downward addictive spiral makes for hard but compulsive reading, with Frankie’s success in staying off the bottle throwing the contrast between them into even more painful relief.

As a shameless follower of Holby City addict, and a long-time fan of Casualty (I even remember the days when Charlie Fairhead was a youngster!), I am happy to confess to being hooked by McCarthy’s Harry Kent series. The books are sharply observed, cleverly plotted and very definitely addictive.