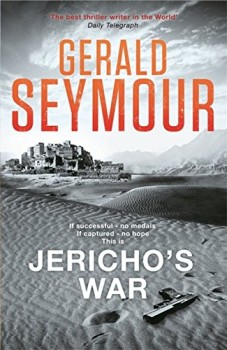 Corrie Franklin has escaped Jihadist capture following a failed mission in Syria, and is recruited for another dangerous operation in Yemen.

The beginning of Jericho’s War is compelling. MI6 officer, Corrie Franklin, having been captured by jihadists whilst pretending to be an aid worker, is in the process of attempting to escape. He has succeeded, whilst imprisoned, in turning an English jihadist whom he refers to as Belcher. He manages to complete his escape and reaches the Turkish border, although in doing so he is obliged to use the utmost force – something that will trouble him for the rest of his life. This exploit makes him famous within the espionage fraternity and, when he has recovered, he is recruited by Jericho, an operative of MI6 working in Muscat, to carry out a mission in Yemen.

The story is told from many points of view. There are two ex-army men known as Rat and Slime who are part of his mission. Belcher, still trusted by the jihadis, and Henrietta, an archaeologist working in Yemen, have also been recruited by Jericho. We are introduced to Caspar and Xavier, American drone controllers based in New Mexico, though they are not part of what is intended to be ‘Jericho’s war’ – a wholly British operation. For reasons essentially of professional jealousy Jericho insists on this, even though the USA is better equipped to carry out the operation. The aim is to assassinate two men – ‘the ghost’, who is an expert in the design of bombs, and The Emir, a celebrated and revered high-up in Al Qaeda.

The story develops slowly as preparations are made and gradually we learn what part each of these characters is to play in the plot. The pace is further slowed by constant shifting of scene and movement from one character to another to provide different viewpoints. In spite of this, there is real tension as we begin to see how difficult and dangerous the mission is. However, the account of the preparations for it is overlong and in this part of the book the reader is continually looking for something to happen.

The outcome, when it does finally arrive, is gripping, though whether it is entirely convincing is another matter. The last page or so could even be described as sentimental in its sudden reversal of what we assume has happened.

One aspect of the book that makes it a rather difficult read, apart from its construction, is the actual writing style. Sentences are frequently long and contain too many ‘ands’ and dashes, so much so that it is sometimes necessary to backtrack in order to gain the full sense of what is being said. In a book that runs to almost 500 pages this becomes rather annoying, particularly when it could have been avoided. These criticisms apart, those readers who were eagerly anticipating the next Seymour novel will find much to enjoy in Jericho’s War.