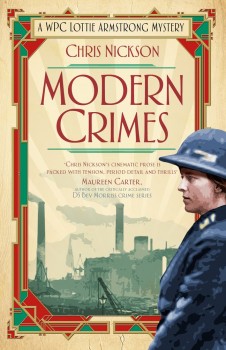 WPC Lottie Armstrong, one of Leeds’ first women officers, battles prejudice and ignorance and she struggles to find a missing girl and solve a murder.

Charlotte (Lottie) Armstrong is one of only two Women Constables in the Leeds force as the city struggles with unemployment, poverty and rising crime and unrest in the aftermath of the Great War and the slide towards Depression.

Despite their war work in the factories, women are still second class citizens and as their men, returned from the front, scrabble to find jobs in a sinking economy, the idea of women in uniform and walking the beat is a curiosity at best – and anathema to many, particularly the traditionalists in the city force.

Lottie is resourceful, inquisitive and practical, eager to prove herself and determined to succeed, but must battle restrictions of her role, apathy from colleagues and the general public until she finds herself on the trail of a frightened and missing girl linked to a murder. Her husband Geoff, injured at Gallipoli, is, unusually for a 1920s man, supportive of his wife’s dream, which sees Lottie and her partner, WPC Cathy Taylor, on daily foot patrol, but only authorised to deal with problems involving women and children.

When they are assigned to investigate the disappearance of an eight-month pregnant unwed mother, they soon realise that though a woman is at the centre of the case, it is certain to exceed their area of authority and involve other sections of the force. When Lottie shows a natural talent for questioning witnesses and suspects she is to ordered to report to the CID – and hopes to become a part of what is developing into a major investigation.

Her people skills, knowledge and passion for the job is noticed by her superiors, but she is constantly side-lined or punished for acting to the best of her ability as she gradually begins to uncover the truth and her bravery is tested to its limits. Lottie is an assertive character, but manages to remain reasonable while demonstrating how her intelligence and drive are misused and under-appreciated merely because she is trying to compete in a man’s world.

Nickson’s rich, outstanding and complex characters and his attention to historical detail will keep you riveted to what is also a story strong on social comment and which brings to life the city itself.

If the ending is slightly disappointing, Nickson uses it to set up the second story in the series – the first chapter forms an appendix to this book – set during the Second World War. Readers are going to hear a good deal more of Lottie, a strong and warm character who could easily feature in a northern version of the successful TV series Call The Midwife were she not a police officer at heart. Her creator has found a bright new heroine.