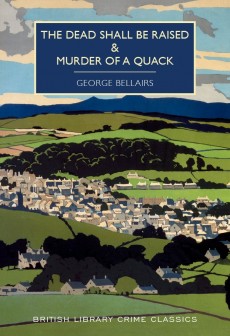 The Dead Shall Be Raised and Murder of a Quack

Two stories featuring Scotland Yard Inspector Littlejohn, the first a very cold case which springs to life with the discovery of a body on a lonely moor, and the other the killing of a homeopathic practitioner in a Norfolk village.

The British Library should be congratulated for re-issuing these two classic cases featuring Bellairs’ implacable, pipe-smoking Scotland Yard Detective Inspector Thomas Littlejohn, protagonist of more than 50 novels published throughout the late 1930s and the four decades which followed. His is a name little known to readers of crime fiction. In real life he was a Manchester bank manager, who wrote in his spare time and under a pseudonym. His work was published by Christina Foyle, owner of the famous bookshop, through her Thriller Book Club.

He was never considered more than ‘middle rank’, but 40-odd years later – his final book was published the day before his death in 1982 – readers who seek more than action and drama will get a long-overdue chance to appreciate his shrewd observation of man’s nature, magnificent feeling for culture and setting and surprising humour and humanity.

Bellairs never attempted the complex puzzles so popular with writers of the Golden Age. His work, much of which was published during the war and reflects those often grim times, was as much aimed at entertainment which would distract his readers from the harsh realities. His hero Littlejohn typifies this. Hardly an intellectual genius like Holmes, he is a man of decency and integrity, occasionally gruff, but patient and tenacious – the quintessential copper. Don’t expect breathless excitement. Littlejohn isn’t exactly Plod, but accurately reflects real police work in an era when the Yard would send their best detectives to aid constabulary forces with crimes, particularly murder, beyond their normal investigative scope.

The first story is set in the winter of 1940. Littlejohn, on leave, travels north to visit his wife, recuperating in Yorkshire after being injured in a bombing raid on London. The Home Guard unearth a skeleton on the moor above the town of Hatterworth. Twenty three years earlier, the body of a textile worker was discovered in the same spot, and the prime suspect never found. When the second body is identified as his, it becomes clear that the killer, if alive, is still at large.

In Murder Of A Quack, Nathaniel Wall, a trusted local homeopath and chiropractor, is found hanged in his consulting room in the Norfolk village of Stalden, but his death was no suicide. Against the backdrop of a close-knit country village, it is an intriguing story of ambition, blackmail, fraud, false alibis and botanical trickery.

Those brief synopses tell all. It is the way Bellairs relates the stories, conveying pace with a minimum of words, his ability to create real settings and characters, which lifts these far above the ordinary.

Some of his writing is quite lyrical. There’s more than a touch of Thomas Hardy in his wonderful description of a Christmas performance of the Messiah in a small Pennines church which is depicted with a warmth which makes the reader feel he not only cares about his characters, but that he is also drawing on real affection for real people in a real community.

Hardly surprising. Hatterworth is a fictionalised version of the town of Saddleworth, just a few miles from where Bellairs grew up – later to be written into crime history as the site of the burials of many of the victims of Moors Murderers Brady and Hindley.

Equally Bellairs’ sense of humour is given full play in his portrayal of the bumbling Norfolk village PC, desperate to appear firm and authoritative to his charges and even more so to make an impression on the visiting Yard man, but sadly henpecked by his house-proud wife whose orders even extend to his vegetable patch!

Modern readers may find some of Bellairs’ concepts, such as the centrality of the church to community life or Littlejohn’s pre-PC occasionally unconventional approach to detection, slightly exaggerated, but both ring true to the period. These mysteries, written in the author’s trademark low-key style, really are minor classics and – with two for the price of one – a more than worthwhile addition to your collection.