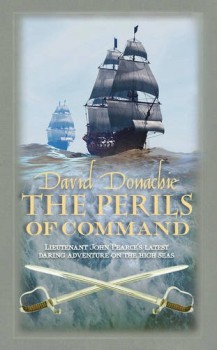 The Perils of Command

Pressed man John Pearce, now a Lieutenant, faces scheming and possible death as he continues his feuds with senior officers and pursues his pregnant lover across Italy.

Is the Georgian naval saga of Lieutenant John Pearce beginning to run out of steam, if you’ll pardon the pun, as he launches onto his 12th – and what is billed as his penultimate – adventure?

If the reader is looking for the derring-do of the earlier books in this long-running series, it’s sadly missing. The plot accurately reflects the title and is very much a description of the tensions and constant strife within the naval hierarchy. True, there is one well-portrayed sea action towards the conclusion in which Pearce is freed of one of the problems which has so far beset his career, but to which he is merely a spectator.

Despite all that it’s still another page-turner as Pearce continues his pursuit of his pregnant lover and his constant strife with the naval hierarchy. As the plot develops, he passes two important milestones which should ease his ongoing problems. To go into more detail of these would be a real spoiler, but readers will be left with the impression that this saga is definitely limping towards a close.

There’s plenty of well-written background detail to distract from what is as much a romantic story as a historically-based sea epic. Horatio Nelson, at this stage a Commander and captain of the Agamemnon, has chosen and set his course towards glory and a heroic death at Trafalgar. The beautiful and adulterous Emma Hamilton and her ambassador husband also feature, providing for a time at least, a haven for Pearce’s lover Lucy Barclay, and the ‘Pelicans’, his one-time press-ganged shipmates, also have their supporting roles to play.

The Perils of Command is not the greatest in the series, I’m afraid. It appears David Donachie is stretching a limited number of ideas as he builds towards what I hope will be a spectacular climax. The near endless domestic issues, a romance which is quite frankly becoming boring, and the rivalries and pretensions among the senior ranks of the Georgian Navy just don’t really cut it any more.