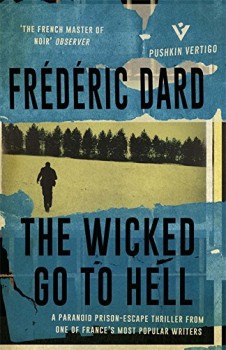 The Wicked Go To Hell

A secret service agent is imprisoned with a spy, and instructed to engineer an escape for the pair in the expectation that the spy’s boss will then make contact and be revealed.

The Wicked Go to Hell was first published in France in 1956. Frédéric Dard wrote some 284 books, using at least 17 different aliases. This is a dark psychological thriller, one of a run of standalone ‘novels of the night’.

The book begins with a chapter narrated in the first person by an unnamed agent called in by his imposing boss. A spy has been caught safe-breaking, and repeated bruising interrogations have not produced a confession. The agent is told he will join the spy in his jail cell, the pair will break out, and that when the spy’s superior gets in touch, the agent will kill him.

The action then shifts to a prison cell and the arrival of two young men. The two, Frank and Hal, almost immediately fall to quarrelling, both accusing the other of being a stool pigeon. Fists fly and the pair are only separated by Bull, the chief warder, a sadist who makes free with his fists or his baton at the least provocation. A week in solitary does nothing to reconcile the pair, who on return to the cell soon begin arguing and fighting again.

After a few weeks of this, the pair devise a simple plan of escape, using their unresolved conflict to lure Bull into the cell. Neither man has any compunction in killing guards who get in the way of their escape. They manage to elude pursuers, and end up in a small island off the coast where their dispute is finally brought to a conclusion.

The construction of the story invites speculation as to which one of the pair is the spy, and since the answer is not given until the last few pages the reader is greatly entertained by spotting clues which suggest one solution, and then the reverse. The twist is that their shared struggles result in an emotional bond which at times seems likely to overcome their professional differences.

The psychological force of the book arises from similarities between the two men, both formed by nature and by the life they have led – aggressive and ever prepared to settle a dispute with their fists. The brutality of the regime in the jail cell only brings them closer together. The French authorities have always taken a tough line, and the regime depicted here is reminiscent of that faced by Papillon in the book of that name, albeit some 15 years earlier and on the mainland.

The ambivalence revealed in the finale between the display of aggression and the hidden friendship which seems to have been created does not ultimately prevent what the author seems to suggest is an inevitable conclusion, a rather depressing commentary on human relationships, perhaps.