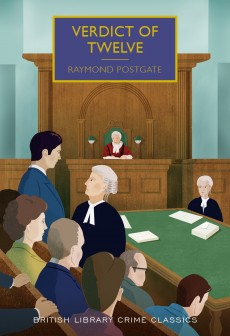 The Verdict of Twelve

Twelve members of the jury exercise their highly subjective judgement on a woman accused of poisoning her nephew.

This book is the story of the trial of Mrs Rosalie von Beer for the murder of her 11-year-old nephew Philip. Philip died after eating hederin – ivy dust – at the house where he lived with his aunt and two servants. Mrs von Beer stood to gain financially by Philip’s death, and the pair lived in a state of mutual detestation. Nevertheless, the circumstances of the death admit to significant doubt as to what occurred.

Sitting in judgement are ten men and two women. The first half of the book is taken up with portraits of the 12; a few in some depth, the others drawn swiftly in telling strokes. What immediately becomes clear is that behind their commonplace appearance live and breathe entirely disparate characters, with strong prejudices which vastly outweigh any direction from a judge to be open-minded about the evidence put before them, and this becomes evident as the trial begins.

The author presents the background and thinking of the jurors in a straightforward and analytical manner, from which the reader clearly understands the constraints acting on their perception of the behaviour of others. For one, guilty of murder herself, the advantage accruing to the accused from the death makes it plain that she is guilty. To another, whose spouse was killed with no redress, horror of an unpunished killing brings her to the same opinion. A third, a religious fanatic, believes Mrs Beer’s loss of interest in her church to arise from a spiritual superiority, a clear demonstration of her innocence.

The majority, however, are prepared to be persuaded, and in fact their views (amusingly represented by an early form of a ‘swingometer’) waver between guilt and innocence with the force of feeling of the last speaker in the jury room. Insofar as they have fixed opinions, these are entirely ones of complete irrelevance: their impression of the class of the accused, their liking or otherwise to those only peripherally involved with the case who gave evidence, or indeed of other jurors.

This book was first published in 1940, and is now reissued as a British Library Crime Classic with an introduction by Martin Edwards. Although there is much about the criminal case which is odd (in fact at least one critic has acknowledged that it is unlikely that it ever would have been brought to trial) it is the psychological portraits which stand out, and they still have great force.

In fact, despite the time which has passed since the book was written, it is not so difficult to envisage jury deliberations proceeding in much the same way today. The emphasis on class would possibly not now be so strong, or at least be reflected in a different way. I also doubt that the jurors would be so polite, or so articulate: what a terrible admission.