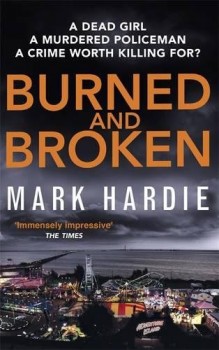 A DI, the subject of an internal investigation, is found burned to death. A vulnerable young woman, fresh from the care system, tries to discover the truth about the death of her friend.

Mark Hardie’s impressive and accomplished debut introduces both a new detective team and a new, remarkably accurate and informed look at modern policing. This intelligent, finely drawn, overlapping story tells it the way it is – and does absolutely no favours to Essex police! The ‘cover my arse’ attitude of the senior officers of a force allegedly structured to meet modern demands and the over-promotion of theoretical ‘managers’ with minimal practical experience is horribly true to life.

Essex was the force that dismissed the 2015 death of multimillionaire international criminal, John ‘Goldfinger’ Palmer, as a heart attack. A post mortem days later revealed he had been shot twice in the chest and four times in the back in a professional hit! Blame fell on two paramedics and uniformed constables. Not one of the many supervisory layers came in for criticism!

This fictional investigation into a DI’s horrific death in his own blazing car and the subsequent efforts to paint the man – under internal investigation at the time – whiter than white to maintain the force’s reputation ring all too true.

Hardie’s new partnership, Det Sergeant Frank Pearson and Det Constable Catherine Russell of the force’s Major Investigation Team are blessedly normal –  and totally believable. Pearson is an old-fashioned CID man, Russell a university graduate disowned by her family for joining the ‘filth’. Neither follows the genre stereotype of drunks/mavericks. Pearson is unusually polite and considerate, his biggest problems a fear of prostate cancer, an ageing and confused hospitalised mother and a messy marriage breakdown.

The younger and less experienced Russell, under suspicion by association in the investigation into her dead former partner, has her doubts about the job and where her loyalties should lie. The setting is a downbeat and crumbling Southend, once the favoured day trip of London’s East End, now a run-down shell of its glory days.

Their investigation into the DI’s death involves a cast of equally shabby and downbeat characters and tensions rise as their stories begin to fold around each other. Their search runs in parallel with that of a vulnerable teenager, seeking revenge on the man she believes responsible for the death of the only friend she made when in care and the disturbed young boy who follows her around. Clever use of different perspectives and well engineered time shifts gradually bring these quests together with a shocking, if hardly surprising, ending.

This compelling and gripping tale has it all: police corruption, witness intimidation, all too believable suggestions of paedophilia and sexual exploitation in a care home, fraud, blackmail, plus a suicide/murder mystery. It’s cleverly written and a well-paced plot with layer on layer of often minor, but crucial detail, blind alleys, office politics, innuendo and rumour, builds the reader’s knowledge of the characters and the several and connected crimes.

The characters are well crafted, realistic and credible and the location is a welcome change to big city settings. Hardie has offered his readers something totally believable – a thoroughly modern and realistic thriller.