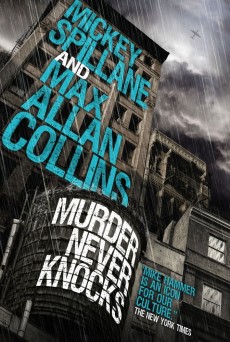 Out-of-town killers seem to be lining up for a crack at tough PI Mike Hammer as violence follows him and his beautiful partner Velda into the poshest of all crime scenes.

Murder Never Knocks is another in the continuing co-operation between the legendary late Mickey Spillane and his friend and literary executor Max Allan Collins – and another winner!

This is probably the best so far, compiled by Collins from the piles of completed chapters, plot and character notes, and, in this case, a draft ending Spillane left on his death in 2006.

It’s set in the late 1960s with plenty of references to place it, such as Spillane’s friend and Herald Tribune showbiz reporter, radio show and TV host Hy Gardner playing a key role, and it is an absolute classic Hammer story.

The plot is quite straightforward. Someone is paying out-of-town hitmen to murder Hammer. Aided by his friend, Homicide Captain Pat Chambers, and his own lovely partner Velda – whose charms are described in detail and at length – Hammer must outwit and outshoot the assassins while finding the reasons for their hiring.

From the streets to a starlet’s extravagant pre-wedding party at the posh Waldorf Hotel he follows the trail to her fiancé, a Hollywood B movie producer, twice her age and with a shady past. As many characters in Hammer stories tend to, the producer becomes a corpse, but the tale continues through various red herrings, twists and turns, filled with action, gunfire and ferocious activity and more than one sexy dame as it builds to a violent and surprising finale.

In Hammer novels, men are men and women are voluptuous eye candy the big tough PI can’t get enough of. Political correctness is 50 years in the future and his arguments with what passes for his conscience on this subject provide some of the funnier asides. When the original Spillane books hit the market, they shocked America with their explosive violence, frank attitude to sex and Hammer’s relentless pursuit of justice inside, or usually outside, the law.

Big, tough, ugly, wisecracking Hammer with his frontier justice, stood against killers, mobsters, Communists and anyone else who threatened the American dream. What made it all work so well was the brutal and graphically illustrative language – eyes trying to blink away death; a chest like a tired beach ball slowly deflating; blood and brains leaking out like he’d done a Humpty Dumpty off a nearby wall.

Hammer hasn’t changed, despite a second creator. He can still strap on his shoulder harness with his .45 loaded with hollow nosed bullets and outfight, outshoot and outlove any other private eye around. If you’re at all delicate, you’ll hate him and everything he represents. If you want a rip-roaring story with non-stop action, there’ll never be anyone better!