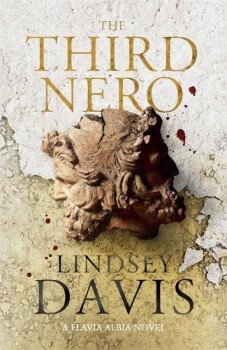 Flavia Albia must expose a plotter at the heart of Rome’s government who could plunge the city and empire into civil war.

Lindsey Davis meets Le Carre meets Deighton in first century Rome in this fifth – and best so far – of the adventures of Flavia Albia, the adopted British-born daughter of that dodgy ace of sleuths Marcus Didius Falco and the inheritor of both his talent and his business.

Rome, 89AD and the unpopular, paranoid and brutal Domitian occupies the imperial throne. But rumours persist that the spendthrift, lyre-playing lunatic Nero, allegedly dead for 30 years, is still alive. Two pretenders have emerged – and been suitably dealt with by Domitian’s ruthless network of informants and secret police. Now a third is rumoured to be in Rome itself and about to reclaim his throne.

At the same time, with the emperor fighting in far-off Dacia, his civil servants begin to believe that the stories are being used by the neighbouring Parthian empire with whom Rome maintains an uneasy peace, aided by a traitor within their own ranks, to provoke a civil war which could spell the end of Rome and its empire.

George Smiley would recognise it all. Substitute Communist Russia’s attempts to undermine the West and the plot is surprisingly modern. Add the internal and inter-departmental rivalries and ambitions of the various intelligence agencies and this could be Britain in the 1950s and 1960s.

But Flavia Albia is no highly-principled Smiley, more Deighton’s anti-hero Harry Palmer, who has inherited both her father’s detective ability plus his ability to bend the rules and turn even the most bleak situation into an opportunity for personal gain.

Her day-old marriage is in trouble – her sexy, but principled husband Tiberius Manlius Faustus, disabled by a lightning strike which saved him from assassination during their wedding procession, may be permanently affected, and funds are limited.

So when a senior civil servant asks her to help expose the plotter in their midst she is obliged to accept and plunged into a conspiracy which sees her infiltrate the Parthian embassy, negotiate with spies, and dodge assassins sent by the Palace traitor.

The endless twists and turns are far too complicated to explain. You’ll have a real job following them as killers, spies, civil servants and soldiers flit in and out of the story, but all the essential elements which made the Falco series – and now those of his daughter – so successful, are still present.

Davis conveys of wonderful sense of living through the times with the wealth of often quite minor detail creating an absorbing and totally believable background. There’s the detective element, the humour in the observed personalities and the fascinating insights into Flavia Albia’s thoughts as she deals with the problems of making a living in an essentially male world – even though much of Roman society was run by women behind the scenes.

Critics have accused her of historical information dumping of customs, geographies, Rome’s societal structures and political past – and will doubtless make much of the attention given to the convoluted world of its civil and intelligence services. But historical mysteries should be firmly set in the times they portray – and this one, like all its predecessors in both father and daughter series, does it quite brilliantly.