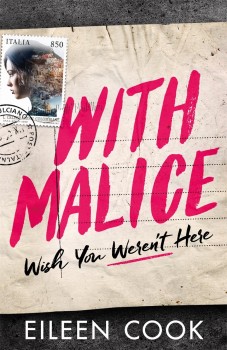 Jill wakes up in hospital with the last six weeks of her life missing. Something terrible has happened. She just wishes someone would tell her what it is.

When Jill wakes up, she’s expecting to be at home in her own bed, not in hospital, attached to wires and tubes, with her leg in a cast. She has no memory of how she ended up there and, as she gradually returns to herself, it becomes clear that she has lost all memory of the last six weeks of her life, including the trip to Italy she’d been so looking forward to.

Jill depends on others to fill in some of the gaps, but no one can provide the crucial piece of missing information: why the car she was driving crashed through a wall and careered down a hillside in Italy, badly injuring her and, even worse, killing her best friend Simone. Jill was flown home to America to recover, but the Italian police want to question her about the crash and the media are all over the case like a rash, billing it as a possible murder-suicide.

With Malice is an excellently crafted young adult psychological thriller. The layers of the story gradually peel back as Jill’s friendship with Simone is put under the media spotlight. Simone’s family are hostile to Jill and believe the crash was no accident. Jill’s divorced parents are at loggerheads. Her father throws money at the problem by hiring a lawyer to look after her interests, her mother sacrifices her job to spend time with her daughter. But despite this, Jill has to face the uncomfortable truth that even her parents don’t seem to believe the crash was an accident.

There are so many unreliable narrators in crime fiction these days, especially in psychological thrillers, that there are times when it seems no storyteller can be trusted. Eileen Cook plays on those feelings to good effect. The intense nature of teen friendships underpins much of the book and gradually it comes to light that perhaps Jill and Simone didn’t have quite the sugar-candy friendship that Jill presents. The question throughout the book remains how far can Jill be trusted and how much of what we learn from her is fact and how much is a clever fiction.

The characterisation is sharp and Jill comes over as a likeable narrator, which gives the gradually unfolding story an even greater chill factor. The ending is clever and doesn’t in any way short-change the reader, which is a hard trick to pull off.