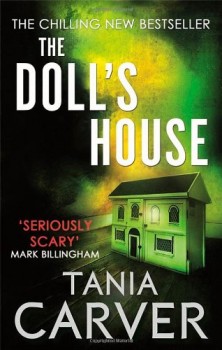 A crime scene has been posed to look like the interior of a doll’s house, complete with a badly mutilated victim. DI Phil Brennan has to struggle with an unfamiliar team and an increasingly distant wife, as well as a series of seemingly unrelated murders.

Dolls' houses aren’t quite a creepy as scarecrows or clowns, but they aren’t something I’ve ever felt drawn to, and after this book I’ll probably give them an even wider berth than usual.

A murder scene in an ordinary suburban house, decked out inside like a room in a doll’s house, with the victim dressed like life-sized doll, covered in blood and very dead. Yep, that’s definitely an unusual opener, and things get even stranger quite quickly. The body has been mutilated, and it looks very much like it was done while the victim was still alive. I won’t say more for the sake of spoilers, but there’s certainly a stomach-churning twist waiting in the wings.

DI Phil Brennan has moved to Birmingham following the house explosion that killed his father. He’s feeling a bit like a fish out of water, and so’s his wife, psychologist Maria Esposito, now working at the university. While her husband is trying to get to the bottom of the doll’s house murder, Maria is struggling with her own problems. She has a nasty feeling that she’s done something she very definitely regrets with smarmy academic and TV personality, Hugo Gwilym. From the hints and insinuations, he’s dropping Maria thinks she might have got drunk and gone a bit too far with him, but the problem is she can’t remember anything about the night before.

The problem with writing about fictional TV personalities in books is that they always seem to come over more contrived than their reality counterparts, and Gwilym is no exception to that rule, although is it’s any consolation, Tania Carver is by no means the only writer who has fallen into that trap. Gwilym comes over as so slimy and insincere that it’s hard to believe anyone could be taken in by him, but the insecure and vulnerable students he targets seem more likely victims than the usually savvy Maria. There were definitely times that I wanted to shout at her very loudly.

Brennan is surrounded by a quirky team he’s struggling to get to know. There’s DS Ian Sperring, passed over for promotion and deeply resentful of Brennan, DCs Nadish Khan (a man still living in the shadow of his father, a bent copper), Imani Oliver (clever and likeable, not over-awed by her boss), and Elina ‘Elli’ Ghosh (the team’s technical expert, a whizz with computers). Unlike Gwilym, they all come over as real people; yes, they’ve got their failings, but they’re still able to come through when the chips are down. Husband and wife writing team Martyn and Linda Waites have a good line in supporting casts, and The Doll’s House is no exception to this.

The plot is well-layered, despite the occasional weak point in characterisation, and I certainly didn’t anticipate all its twists and turns. This is another strong addition to the series. I hope we see at least one more case for Brennan in Birmingham before he makes a return to his old haunts, as I’d really like to see more of Khan and Co.