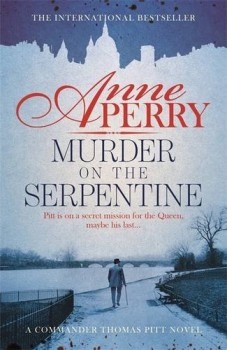 Murder on the Serpentine

An ageing Queen Victoria asks Special Branch Commander Thomas Pitt to look into the strange death of one of her closest confidantes who, on her behalf, had been investigating the influence of a wealthy playboy on the Prince of Wales.

This clever, elegantly constructed, plot-driven mystery positively reeks of the hypocritical snobbishness and rigid social conventions of the Victorian establishment. The often desperate and deplorable social conditions of the era just do not exist, lost in a whirl of soirees, garden parties, backbiting, gossip and speculation as the rich and well-connected sweep in their carriages from private club to exclusive dinner party.

Gamekeeper’s son Thomas Pitt, who has risen through the ranks of the police to become the Commander of Special Branch – the intelligence organisation set up to combat the threat of Fenian terrorism and subversion by England’s enemies – is hardly a part of this rarefied world. But when he is summoned by an ageing Queen Victoria and ordered to investigate the death of one of her closest confidantes, found dead at night in a rowing boat on the Serpentine, he has no choice but to obey.

The dead man, at Victoria’s request, had been looking into the influence of a wealthy racehorse breeder and playboy on her impressionable and often none-too-smart son, Edward, Prince of Wales, who must soon become head of the British Empire as King Edward VII.

The Serpentine death has sparked wild rumours in society, but Pitt quickly establishes that it was no accident. He is forced to act alone in what quickly becomes the most sensitive of investigations, and soon finds himself embroiled in a plot that threatens not only reputations, but also the safety of the Empire.

With his close friend and mentor Lord Narraway abroad with Pitt’s adopted aunt Vespasia , he has no one to turn to, not even his intelligent and determined wife Charlotte, who has frequently helped and supported his career. But Charlotte is no fool – and is also socially connected. With her equally inquisitive sister Emily, she tours the high society salons for information Pitt can use.

Perry’s plot is clever – and based on historical fact – the dreadful hiatus between the first and second Boer Wars and the German Kaiser’s declared intention to widen his influence and territories. Her easy to read style and concentration on her main characters – the rest, particularly the society ladies, are brilliantly sketched rather than drawn full-fleshed – keeps the reader focussed on the main action.

Pitt is a dedicated servant of the state and a decent man. He is not entirely comfortable in exalted circles, and must also face coming to terms with both his responsibilities and the questionable morality of some of the actions he is forced to take. How he resolves this dilemma makes for a clever and dramatic denouement in which justice is done – but as so often in the dark and secret world of intelligence hardly by traditional means!

Murder on the Serpentine is a great read. It has the feeling of finality for the long-running and always fascinating series, but I hope that Thomas Pitt will continue to offer his loyalty and support to the soon-to-be new king!