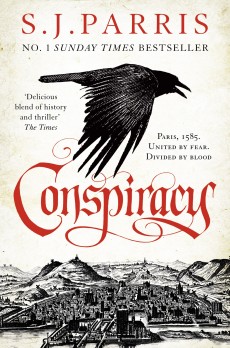 Renegade monk, philosopher and heretic Giordano Bruno is caught in the middle of political and religious strife when he investigates the murder of a friend.

SJ Parris takes renegade monk, philosopher and heretic Giordano Bruno into the excesses, uncertainties and violence of Henry III’s Paris in this convoluted, but brilliantly convincing and fast-moving fifth story of the series

What makes the Italian, once a Dominican monk at the monastery of San Domenico Maggiore in Naples, so compelling a protagonist is that much of the background is completely factual. His outstanding intellectual ability and a taste for free thinking – he pioneered the science of mnemonics and was possibly the first to propose the theory that the universe is infinite – brought him into conflict with the Catholic church.

When he learned that the Inquisition was preparing an indictment against him, he shed his religious habit and wandered through Italy, Switzerland and France where he tutored the dilettante King Henry III, before moving to England in 1583. Many of his books were dedicated to powerful individuals such as the French king, Sir Philip Sidney and Michel de Castelnau, the French ambassador to England, and this allowed him to move in powerful circles. Although he published some of his most important work in this period, once again his controversial views and tactless language cost him support of his friends. But there is evidence that, while staying in the French Embassy in London, Bruno, using the  pseudonym ‘Henry Fagot’, spied on Catholic conspirators for Sir Francis Walsingham, Queen Elizabeth’s Secretary of State and spymaster.

In October 1585, after the embassy was attacked by a mob, Bruno returned to Paris with Castelnau to find a tense political situation. With memories of the St Bartholomew’s Massacre of Huguenots still fresh in the minds of both Catholic and Protestants, France was on the verge of civil war with the fanatical Catholic League, headed by the ambitious Duke of Guise, working to bring down his cousin the king.

Seeking to have his excommunication overturned, Bruno turns to a priest he once knew, only for the cleric to be murdered after delivering an inflammatory sermon against the king. Guise blames King Henry and incites street riots. A worried Henry tells Bruno that if he won’t find the killer, he will lose the royal patronage. So Bruno is launched into a series of conspiracies and killings which combine to produce a thrilling and entertaining read.

This massive 500-plus page story has all three elements needed in a historical thriller: subtly realised characters and an ever-present sense of danger, in a clever and believable plot that fits well with the history; an engaging protagonist, a strong supporting cast; and an atmospheric sense of place.

With powerful characters like Henry, Duke of Guise, the scheming and driven Queen Mother Catherine de’ Medici and the weak and sensuous King Henry, let alone a wonderful troupe of Italian actors and the spymaster Walsingham ever-present in the background, this is a truly superb and accurate picture of 16th century Europe, with the thrones of both France and England under threat.

As Parris goes from strength to strength, Bruno, again disappointed in love, leaves for Germany and Prague – again true to life – for his next adventure. If this is your first experience of this likeable and eminently believable hero, go back through the previous four books. Each one of them is just as firmly based in fact – and just as good!