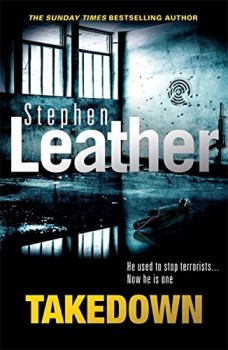 Hitman Lex Harper is contracted by former MI5 operative Charlotte Button to take out a former special forces soldier who has thrown his lot in with Islamic terrorists and is intending a high-profile attack on British soil.

Caleb McGovan is a former member of the UK’s elite special forces regiment, the SAS. But, disillusioned with the things he saw and did as part of his service in the Middle East, he has now converted to Islam and is determined to strike a blow at the very heart of the United Kingdom.

He travels to Syria and proves his worth to members of the so-called Islamic State, enabling him to enlist the help of them and their jihadists against the targets that he’s carefully selected. His planning and preparation is meticulous, but despite that he doesn’t manage to fly entirely beneath the radar and someone wants him dead. Someone who isn’t bothered about playing by the rules.

The same could be said of former MI5 agent Charlotte Button. Button knows where all the bodies are buried – literally, in many cases. She’s been cut loose by her former service, but Button has an insurance policy – three flash drives containing the details of a lot of things the British government would prefer to keep put of the public eye. These are locked safely away in bank vaults, but then a series of high-profile robberies makes it clear that someone is after Button’s secrets and when they have all three copies in their hands, there’ll be nothing to stop them coming after Button herself.

When Button is hired to ensure that Caleb McGovan is taken down, she turns to Lex Harper, a hitman she knows and trusts to get the job done. And if Harper is successful, Button will be able to rely on some protection against her own enemies. Harper is given a free hand to assemble his own team, and his instructions are simple: find McGovan and kill him. If that means preventing a terrorist attack on British soil then that’s fine, but he’s left in no doubt that McGovan’s death is his primary objective.

Anyone who has followed Stephen Leather’s ‘Spider’ Shepherd thrillers will have encountered Lex Harper before. When I started Takedown, I wondered if he would prove a strong enough character in his own right to carry the story, but I’ve always like the tough, pragmatic Button, so I was prepared to take a chance. Takedown did a good job of allowing Harper to shine but for ‘shine’ read ‘leave a trail of death and destruction a mile wide behind him.’ But it’s hard not to like Harper, especially when he’s prepared to take on the unpleasant and violent son of a Russian mafia boss who put a friend of his in hospital.

Lex Harper certainly rises to meet the challenge of being Leather’s leading man, and it’s always good to see his motley crew of helpers in action again. Takedown is a slick, tough thriller with massively questionable morals, but that’s all part of the world that Button and Harper inhabit. It’s not subtle, but then subtlety isn’t one of Stephen Leather’s strong points.