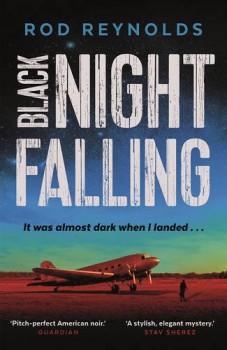 Reporter Charlie Yates answers a plea from a former colleague and is plunged into a stew of small town corruption and murder.

Rod Reynolds’ sequel to his debut The Dark Inside, his violent and gripping story of corruption, killing and crime on the Texas-Arkansas border, is pretty much a curate’s egg. Where it’s good, it’s very, very good. Where it’s not it feels and reads like a tribute to Chandler and Hammett – and they did it much better!

It’s set a few months after the events of its predecessor, and washed-up reporter Charlie Yates, having left Texarkana for the safety of the West Coast, finds himself drawn back South to immediate post-war Hot Springs, Arkansas, as an old acquaintance begs for his help. This time it’s less of a story of his own choosing, more a desperate attempt to do the right thing.

Again Reynolds displays a feel for place, period and atmosphere which marked his debut. And so he should. Many of the key characters and events are historical.

Hot Springs has long been a hotbed of corruption and violence. In 1899 three policemen and a deputy sheriff of the Garland County Sheriff’s Office died in a street shoot-out over their support for opposing criminal factions! The town became a gambling mecca led by Owney Madden and his Hotel Arkansas casino. The 20 years to 1947 saw its heyday, with no fewer than ten major casinos and many smaller houses operating on Bathhouse Row. All openly advertised the availability of prostitutes and illegal off-track bookmaking.

Naturally this wide-open town attracted organised crime and its Arlington Hotel was a favoured retreat of Chicago mobster Al Capone and others. Local law enforcement was controlled by a political machine run by long-serving and corrupt mayor, Leo P McLaughlin. A former sheriff, who tried to enforce anti-gaming laws and honest elections, was shot dead in the street in daylight in 1937. No one was ever charged.

McLaughlin’s domination ended in 1946 with the election of a slate of returning World War II veterans in the ‘GI Revolt’ led by Marine Lt Col Sid McMath, who was elected prosecuting attorney.

With such a rich historical past – all these characters figure in some guise – Reynolds has the perfect canvas for an unsettling and morally ambiguous story in an atmosphere of escalating fear and tension.

The acquaintance, whose call for help and hints that the unreported killings of three local girls might be linked to events in Texarkana drew Charlie back, is himself murdered. Yates is thrust back into a world of murder, deceit, cover-ups and dodgy deals with nothing but clues left by a dead man to solve a series of interlocking and convoluted crimes.

Some readers may find Yates one of the most intriguing, complex and likeable characters to have appeared in years. But I find his self-consciously terse, cynical narration and his deliberated dated and unsubtle dialogue a distraction from this otherwise clever examination of guilt, cowardice and how hard it is to do the right thing.

There are twists and shocks in abundance as he moves towards what for me is the weakest part of the story – a violent shoot-out which lacks any sort of credibility or ballistic accuracy! Pity. This comes close to classic American period noir.