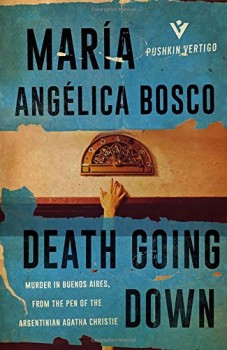 A beautiful young woman is found dead in the lift of a luxury Buenos Aires apartment block. Inspector Ericort and his assistant Blasi try to find out why.

The body of Frida Eidinger is discovered late one night in the lift of a small block of Buenos Aires luxury flats. It is established that she was poisoned, and suicide or murder both seem to be possibilities. The police soon establish that the residents have many secrets, and the death is only the first of a series as investigations continue. For a long time, however, the motive for the deaths remains obscure.

Eidinger was discovered by Soler, a womanising drunk, who arrived only shortly before Luchter, a doctor. Torres the caretaker and his wife have plenty of tittle-tattle about the others currently in residence: Inarra, his wife and daughter, and a Bolivian, Czerbo, and his sister. Frida Eidinger’s husband lives elsewhere. All of these key persons have alibis.

Inspector Ericort and his assistant Blasi proceed by interview and cross-checking of facts, but have one or two unusual methods too. Ericort feigns a snooze on the bench in the square outside, enabling him to hear the remarks of the local gossips, who sit outside with their knitting shredding reputations. Blasi becomes obsessed with a laundry delivery boy who has unaccountably gone missing.

The police think it likely that Frida was in the building to visit one of three men: Luchter, Czerbo or Soler. Inarra, an invalid, they rule out. But why was Inarra’s daughter out so late and why didn’t she use the lift? And why does Eidinger’s husband display such unease?

This novel was first published in Spanish in 1954, and was the first of  María Angélica Bosco’s detective fictions. Bosco was known as the Argentinian Agatha Christie for her dedication to the genre, and this book displays many of the trademarks. Apparently respectable families generate plenty of food for gossip which is exposed through police enquiries; Ericort brings them all together in the final chapter to receive a comprehensive explanation of events, and of course identification of the guilty party.

If Christie’s appeal lies with the veil of middle-class respectability torn aside by a moment of extreme violence, Bosco’s domain is very similar but as far as UK readers are concerned given an exotic twist by the location. What is traditionally known as a Latin temperament is in evidence, although several characters are recent arrivals from Germany. This suggested a plot development which misled me for while.

The book is one of a substantial list of classic crime now being re-issued by Pushkin Vertigo, and despite being more than 60 years old still reads well. The style of the crime and its detection is of a different time, but those who find the form engaging will discover plenty to enjoy here.