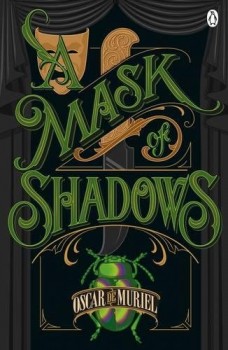 London’s top luvvies bring the Scottish Play – and its curse – north of the border and create a scene of chaos and corpses for paranomal investigators Inspectors Frey and ‘Nine Nails’ McGray.

Multi-skilled Mexican-born Oscar de Muriel, chemist, translator and violinist, goes from strength to strength. This third adventure for the mismatched investigators of Edinburgh’s Commission for the Elucidation of Unsolved Cases Presumably Related to the Odd and Ghostly is as good as it gets in Victorian melodrama. Alternating a rich creeping horror, which at its darkest is often frighteningly convincing, with broad and bawdy humour, sympathetic observation, and a large helping of historical fact, de Muriel first entices, then ensnares his readers.

The darlings of the Victorian London theatre, Henry Irving and Ellen Terry – think Branagh and Thompson, Dench or McKellen and double it – plan to take their acclaimed version of the Shakespearian tragedy, superstitiously known as the Scottish Play, to Edinburgh. Before it even closes in London, terror treads the boards. A banshee – a female spirit in Irish mythology who heralds the death of a family member – howls and a grisly message smeared in human blood foretells disaster.

Their investigation is hampered by the outsize egos and personalities of the key players, Terry, Irving, and Irving’s peculiarly devoted company manager, Bram Stoker – later to win international fame as the author of the horror classic Dracula. But one things is clear. All three have enough Irish connections – Stoker is descended from Irish kings – to either be killed or perhaps be the killer!

Mask of Shadows is the third outing for this pairing, and de Muriel’s characters have had time to mature into their roles, as has his refined writing style, making this by far the best book in the series. There are touching insights into McGray’s tragic family situation and new perspectives to the detectives’ growing relationship.

The sceptical Frey, the narrator, immaculately dressed, socially adept, the product of a professional London family, begins to adjust to the harsh realities of life in Scotland’s capital and to understand what motivates his partner. Adolphus McGray, a rough, tough, Scot, with a predilection for violence and an unshakeable belief in the supernatural, is not the barbarian he likes to appear. Even his frequent dismissals of Frey as a soft, la-di-dah Southerner, expressed in the most basic terms, have lost their edge and begin to sound like the banter of a friend!

The magnificent clairvoyant Madame Katerina again has a part to play, but it is the extraordinary intimidating and charismatic personalities of both Irving and Terry, which dominate this clever plot. Toss in a cameo performance from the poet, writer and bon viveur Oscar Wilde and it’s a mix which will keep you rivetted to the page.

The dialogue is full of colour, wit – and imaginative insults. Costumes, on and off stage, are vividly described and the streets of Edinburgh come alive. But there is also a dark reality of secrets and deceits, even children badly harmed, both physically and psychologically. For all its glamour and theatricality at times this is a tragic read.

It is de Muriel’s mix of reality and imagination – read biographies of Irving or Terry, they really were as arrogant, manipulative and scandalous as he would have them appear and Stoker’s devotion to Irving is still the subject of speculation – with the horror, history, music, science and humour that makes Frey and McGray two of the most original and entertaining detectives you could wish to meet in historical crime fiction.