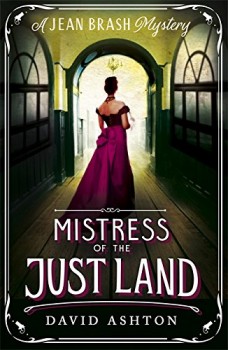 Mistress of the Just Land

Jean Brash, a child of the streets, now madam of Edinburgh’s finest brothel, sets out to discover who killed an unpopular judge and left his body in her cellar.

Actor, author and scriptwriter – Casualty and EastEnders – David Ashton is better known for his Victorian Edinburgh crime series featuring Inspector James McLevy, a sort of Victorian Morse, and a great psychological creation, a man with demons of his own obsessed with meting out justice. McLevy features, but merely in a supporting role, in this new spin-off series which stars the Queen Bee, Jean Brash, who first appeared in Radio 4’s Inspector McLevy mysteries,

Brash is a beautiful and formidable woman. A child of the mean and violent streets of Leith, Edinburgh’s sordid port, she has used her intelligence and drive to rise through her profession – and the occasional venture into crime – to become owner and madam of the city’s most select whorehouse.

When a prominent and hated judge is found garrotted, stabbed, and hanging in the cellar her girls use for ‘correction’ after a New Year’s Eve of wild celebrations in which he took no part, she faces total ruin. Rather than risk all by involving McLevy – and his strait-laced superiors who want to close her down – she decides to hide the body and bring her own cool intelligence to solving the murder.

The search for the killers takes Jean back to her own dark past as she uncovers a web of political and sexual corruption, involving both child abuse and torture, and also the highest reaches of the Edinburgh establishment.  As more killings follow, it becomes apparent they are vengeance murders, linked to the death of a young boy in a ‘care home’ more than 20 years previously. As she searches for clues in the mean wynds and tenements of the city and its port, McLevy, himself under pressure to stop this cull of Edinburgh’s great and good, conducts his own investigation.

This is an elegant, convincing and intriguing Victorian Gothic story. Ashton again portrays Edinburgh so vividly you feel the cold – and the menace of the Old Town’s steep cobbles and dark corners. But it is not without its touches of humour and the return of familiar characters such as Mulholland, Roach, Craddock, and Hannah Semple ensure that it runs on seamlessly from the earlier series. At the same time, it firmly establishes Jean on centre stage. She is a larger than life character, wily and intelligent, not a woman to cross as she skirts the edges of the law to dispense her own justice, and is absolutely the focus and heart of what promises to be a superb new series.