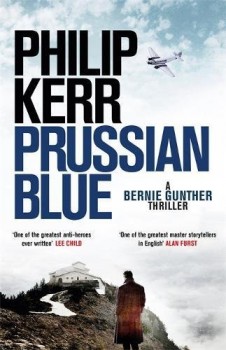 Bernie Gunther takes flight from a Stasi apparatchik in 1956, putting him in mind of his 1939 investigation into a murder at the Berchtesgaden.

Bernie Gunther ended his last adventure in the Riviera, rubbing shoulders with Somerset Maugham while being drawn into an East German Stasi plot to undermine the British secret service. The plot failed, and a conspirator by the name of Anne French escaped to England. The Stasi now (1956) want French killed to eliminate traces of the operation, and Erich Mielke tells Gunther he has the job.

Gunther is unwilling, and soon manages to elude the Stasi bullyboys and take off for Germany, where it will be easier to go to ground. Seeing Mielke again has, however, brought back memories of the time both were involved in a 1939 investigation when his boss Heydrich sent him to Obersaltzberg to get to the bottom of a murder at the Berghof, Hitler’s rural retreat.

Back in 1939, notwithstanding its bucolic appearance, the area is being transformed at great expense to meet Hitler’s preferences under the supervision of Martin Bormann. Those at the top of the Nazi hierarchy are ever in competition for Hitler’s regard, and keen to undermine their competitors. Bormann needs to solve the murder discreetly before Hitler becomes aware there was even a risk; Heydrich is happy to help by providing his best detective, in the hope he can find some dirt on Bormann to be exploited for advantage.

Gunther’s expertise quickly uncovers key elements of the killing, and seems likely to clear the matter up within the week he is given: Hitler is arriving and his safety must be assured. The task is, however, substantially complicated by others on the scene who are keen to conceal a range of criminality. The dead man was creaming off large sums of money for Bormann, from building contractors and a local brothel, supplying drugs, and forcing local residents to sell their houses at undervalue.

Gunther thus has to contend with subtle attempts to undermine his investigation, as well as the sabotage of his car which kills a subordinate, and an attempt by the SS to murder him. As ever, Gunther’s life is balanced on a knife-edge, but his skills and quick wit keep him safe: he has no illusions about the Nazis. His luck is tested in both 1939 and 1956 stories.

Despite working within a morally repugnant regime, Gunther maintains his humanity and does what he can to protect the innocent, although given the times his efforts are often thwarted. This is the 12th Bernie Gunter thriller and maintains the high standard set by earlier books in the series: great detective stories underpinned by solid historical research. The author seamlessly combines real characters and his own inventions; never was getting to grips with a historical period made so enjoyable.