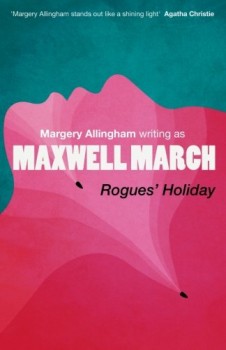 Inspector David Blest, unhappy when his superiors curtail his investigation into the apparent suicide of a young man-about-town, takes a break at a posh seaside hotel, where the distinguished lawyer, whose account of events leaves him dissatisfied, is also staying

If you think the exotically-named author sounds like a character from the Golden Age of crime fiction, you would be absolutely right. March is a pseudonym used by Margery Allingham, one of the four Queens of the age, and described by Agatha Christie as a writer who ‘stands out like a shining light’.

Now her estate has released one of three so-called lost novels she wrote as March, starting in 1931, to earn an income while developing her most famous character, the aristocratic and quirky amateur detective Albert Campion.

By modern standards, where anything goes, this a bit of a cosy mix of villainy, romance, intrigue and mystery. It’s also a bit of a potboiler – it was written to be serialised – and lacks at least some of the scintillating wit, subtle characterisation and skilful plot development of her later work. Nonetheless, this story, as much a thriller as mystery, is a fine example of its period and well worth the read, not only for the legions of Allingham fans.

David Blest, a handsome young Scotland Yard Inspector, is dealing with what at first glance appears to be the suicide of a young man-about-town at an exclusive gentlemen’s club. Things just don’t add up, but his superiors are happy to take the easy option and he is persuaded to take leave.

Dissatisfied, Blest books into the same seaside hotel as the distinguished lawyer, whose account of events at the club have left him dissatisfied. Until now devoted only to his career, his views change dramatically when he meets a charming and beautiful young woman whose apparent ill health piques his interest.

From there, the plot and the romantic interest thickens. The murder of the man this mysterious girl hardly knows, but was to wed, launches Blest into a morass of greed and potential killings – even putting his own life at risk – as rival criminal factions bid for a fortune.

The story gains momentum, adding layers of complexity and dragging the reader into what is a very 1930s tale, to the point that it is actually hard to put down. It’s full of clichés, coincidences and overstated, quite impossible, characters – and of course, ends with Blest involved in a last-minute dash. This is melodrama at its best. The naïve ‘love at first sight’ angle, so popular at that time, a handsome hero, a beautiful and troubled heroine, totally evil baddies and a cast of minor villains, retired coppers and confused hotel staff provide plenty of surprises.

If you’re looking for a story to relieve the almost wall-to-wall gloom and brutality of modern detective fiction, this will bring a smile to your face. Despite having originally been a magazine serial, there are more than enough glimpses of what was to come from Allingham’s prolific pen to make this a charming, if dated, read.