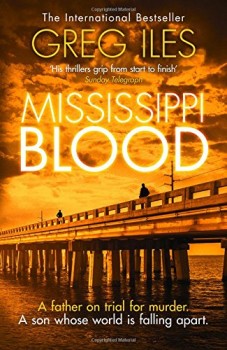 Dr Tom Cage is on trial for the murder of his former black nurse and lover, but refuses help from his lawyer son Penn. Meanwhile the whole Cage family is under threat from the Double Eagles, a savage KKK splinter group.

This concluding part of the sweeping Natchez Burning trilogy is an epic story of love, betrayal, adultery, hatred, revenge, murder and racism, with more than a bit of history and some brilliant courtroom drama thrown in, and it lays bare the problems of America’s Deep South.

Rock ‘n’ roll writer Iles – he’s currently with The Rock Bottom Remainders – is far from the bright lights as he exposes the dark history of slavery, the Ku Klux Klan, racial inequality and miscegenation. His work is gritty and realistic, uplifting and depressing at the same time, but even at its most harrowing, always impressive, giving his readers a real insight into what has happened over the past 150 years.

He presents these historic events – particularly the civil rights struggle of the 1960s and 1970s – with passion and insight. No one is spared responsibility for their actions, while many are held accountable for perpetuating indefensible and often barbaric practices.

Penn Cage’s world is collapsing around him. The former prosecutor, now mayor of his hometown Natchez, has irrevocably compromised his own principles, shattered by the brutal death of the campaigning journalist he loved. He dreams of vengeance against the psychopathic racist killers of  the Double Eagles, a brutal splinter group of the Klan, who still pose a very real threat to his whole family, but can find no way to legally link them to either the murder of his fiancee or scores of other crimes against both black and white.

At the same time, his father Dr Tom Cage, once a pillar of the community, about to be tried for the murder of a former lover, his black nurse, seems bent on self-destruction and has frozen Penn out of the trial, preferring to risk dying in prison to revealing the truth to his son. The product of that affair was a second son, and it is Penn’s bitter half-brother who sets the case against his father in motion.

But the trial is the least of Tom Cage’s worries. The nurse, Viola Turner and her brother, were once targets in the battle between Penn’s father and the Double Eagles, now led by psychopath Snake Knox, who will stop at nothing to keep their past brutalities from coming to light.

Penn is unable to trust anyone – not even his own mother – but finds an unlikely ally in best-selling back author and former combat soldier Serenity Butler. With the help of older friends, they struggle to unearth this secret history, even at the cost of putting their own lives on the line.

This extraordinary and breathtaking trilogy was seven years in the making. It is ugly, brutal and not for the faint of heart. Iles pulls no punches, minces no words, leaves no historical stone unturned. He does it with piercing insight, a masterful ability to blend history and imagination and outstanding narrative ability. The result is a highly emotional and quite unforgettable novel.

This can be read as a standalone, as there are enough back-references to fill in most of gaps. But to get the full impact, read the two earlier books Natchez Burning and The Bone Tree which build towards this stunning and suspenseful conclusion. You may be shocked, even disgusted. You certainly won’t be disappointed!