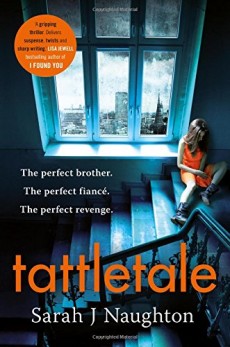 Mags Mackenzie hasn’t spoken to her brother Abe for years, but she flies to his bedside after he falls down four flights of stairs. It looks like suicide, but something doesn’t ring true.

By the time Mags Mackenzie, a successful lawyer, meets her emotionally scarred, future sister-in-law, Jody Currie, she knows the wedding is never going to happen. Abe is brain-dead and in an enforced coma after falling four flights.

Jody is by his side, unwilling to accept the inevitable, unable to imagine being without the love of her life. Mags is regretting her ten-hour flight from Las Vegas, almost unmoved by her brother’s plight. But then why would she care? She and Abe haven’t spoken for years; their wrecked childhood took care of that.

But the more time Mags spends in Abe’s poky flat inside the converted London church, and meets her brother’s neighbours, all marginalised and fragile people, the more she feels Abe didn’t attempt suicide.

While Jody clings to hope, Mags starts to probe, searching for the truth. If it wasn’t a suicide attempt, was it an accident, or attempted murder? And what isn’t Jody telling Mags?

There are two aspects to this novel that all readers should be aware of before opening the book. The first is the preliminary chapters, whilst plunging into action and suspense, are random and confused, verging on messy. The second is that there are several graphic scenes of child abuse and rape.

Much of the book is written in the first person point of view, and in the present tense, which, once past the confused beginning, drew me in. The chapters hop between the main characters, Jody and Mags, with other chapters devoted to Mira and unnamed children. At first, Mags is a dislikeable person, but as Naughton teases her backstory out, the reader begins to understand her coldness and seeming indifference to her brother’s tragedy. It is easy to feel sorry for Jody at first, but soon the reader senses she is an unreliable narrator. And the reader, along with Mags, swings between wanting to shake her out of her obsessions, and feeling her pain.

Although the characters are well developed and leap from the page, I felt their traumatic childhoods were portrayed with a little too much melodrama and a degree of overkill. Perhaps this is why I felt less empathy with them than I should have done. Yes, Sarah Naughton did a decent job of peeling back the layers on Jody and Mags, but not enough to make me revise my opinions entirely. At no time did I want to jump up and down on the sidelines, cheering either of them on. The one character who remained flat, despite frequent reference, is Abe. I would like to have got to know him more, as he was the plot centre.

The plot is intriguing, but slightly predictable. That plus heavy-handed foreshadowing meant there were few surprises, and no out-of-the-blue twists. Without throwing in spoilers, the act of revenge was almost farcical. Certainly not the behaviour one would expect of an intelligent lawyer, and it obliterated my sense of disbelief. The ending, for such a dark, brooding story, was a bit twee, although Naughton just about stopped short of ‘they all lived happily ever after.’

I didn’t hate the book – far from it. For a debut psychological thriller, it has many of the key ingredients, and is almost there. The voices are distinct after the first chapters, it is a fast-paced, easy read, and there is the bonus of a bit of heartbreak. It did not have me on the edge of my seat, though, as Naughton has overdosed the story with the spooks, shadows and threat factor.