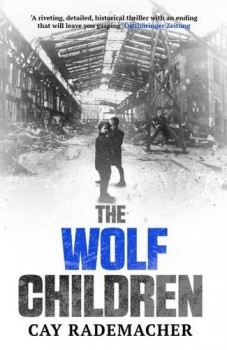 It’s 1947 and the long, freezing winter is over. The discovery of the body of a young boy, lying across an unexploded bomb in the ruins of Hamburg shipyard, sparks off an investigation which turns up further young victims.

This is the second book featuring Chief Inspector Frank Stave of the Hamburg CID. The first, The Murderer in Ruins, was set in the devastatingly cold winter of 1946-47, and this one in the early summer of 1947 – a summer that was just as hot as the previous winter had been cold. Whilst the weather may have changed, conditions in Hamburg are still dire. It had been a particular target of the RAF and the docks and shipyards, which had housed submarines under construction, had been almost completely destroyed. There was a shortage of clean drinking water and the system of food rationing was largely ignored as the black market took over.

Particularly tragic was the situation of the many orphans to be found in Hamburg. In addition to those who had lost their parents in the many bombing raids, there were more in the form of the ‘wolf children’, who had managed to escape from what was now the Russian zone. Having achieved that, they found their prospects in Hamburg very bleak and frequently became involved in petty criminality simply to keep themselves alive.

With so much killing and destruction, one more death – even that of a child – is not regarded as of any great importance. Stave, however, sees things differently. Their elders had turned them into orphans and destroyed the world around them. The very least they deserve is that those who murdered them be punished. It is this acceptance of collective responsibility that drives his investigation, even when there seems to be little chance of its being successful. It also makes him an attractive – almost an heroic character – in the eyes of the reader.

In a novel of this kind there is always the danger that the thriller aspect will be subsumed in the historical, but whilst those unfamiliar with the immediate post-war situation in Germany will find much to interest them, all readers will want to see how the investigation turns out. Without being too critical of the ending, it is a long time coming and when it arrives it is a little rushed and not entirely convincing. The last few pages are something of an anti-climax.

All along Stave has struggled with two personal problems whilst conducting the investigation. The first concerns his relationship with his son, Karl, who has just been released from a POW camp in Siberia and is so traumatised by his experiences that he finds it impossible to adjust to life in devastated Germany. The second of Stave’s concerns is his love affair with Anna which, for reasons that are not entirely clear, has stalled. No attempt is made to resolve either of them and it seems clear that a further Stave story is planned. If so, it would seem to be necessary to find a new location.