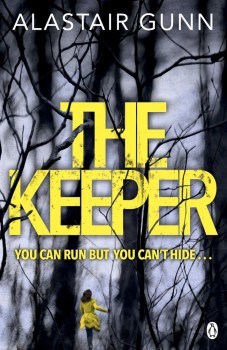 DCI Antonia Hawkins believes that the victims of a serial killer have all been kidnapped and then hunted down in a twisted game.

A man is found buried in a secluded wood on the outskirts of London. The body is naked, beaten and bruised. As DCI Antonia Hawkins and her team investigate the incident other bodies are found in the same condition. Hawkins concludes they are the victims of a serial killer who captures his victims, imprisons them for 24 hours, allows them to escape and hunts them down before killing them. The novel then follows the race against time before the killer strikes again.

Set against this unusual criminal activity there is a sub-plot that reflects this developing story involving the everyday upheavals of Hawkins’ domestic life and family. It’s one extreme to another, but the over-arching themes seem to explore how people cope with the problems of dealing with relationships – how friendships private and professional develop or don’t. To add to her woes of a heavy workload there is a question mark over Hawkins’ own mental state, as to whether she has recovered from a knife attack on her in the line of duty, or whether there are underlying psychological complications that need to be dealt with, but will never be settled because she is reluctant to engage with her counsellor.

There is plenty of action, tension and intrigue to keep the reader engaged in the narrative, but without these sub-plots adding depth to the story and the all-round picture of Hawkins, this could be a standard, albeit well-written and dramatic, crime investigation. What we get as a bonus is an insight into what coping with real life must be like for a dedicated police officer having to cope with crime and juggle a life outside the job.

Alastair Gunn’s previous novels My Bloody Valentine and The Advent Killer also feature DCI Hawkins and this novel helps us to get to know her better.