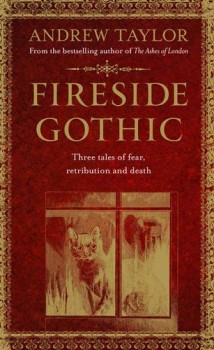 A trio of supernatural, eerie and haunting Gothic novellas.

Prolific author Andrew Taylor’s latest offering is a real blast from the past! This collection of three Gothic supernatural novellas, written over a period of years, revitalises a genre which appeared to have been lost, buried among the casual evil, lust and brutality of modern crime writing.

What makes them so effective is that none is a great, set piece occult adventure drama, a la Dennis Wheatley. All three feature very normal people, doing very normal things in very normal settings, baffled, frightened, and deeply affected by happenings beyond their control and with no sensible or logical explanation.

The opening story, Broken Voices, is perhaps, because of its place in time, nearest to the classical Gothic model. It’s Christmas before the Great War. Circumstances force two lonely schoolboys, one facing disgrace, into companionship. Left in the care of an elderly retired teacher, there is little for them to do but listen to his eerie tales about the nearby cathedral.

If the tales are true, one offers a precious chance for redemption as well as adventure. But the cathedral is filled with eerie happenings and hidden dangers.

In The Leper House, a story set clearly in the present, a man’s car breaks down as he returns from his estranged sister’s funeral. Lost on a stormy night near the bleak Suffolk coast, he seeks help from the only source of light, a remote cottage in the remains of a church by the sea. The mysterious woman who answers his knock begs him to leave, yet he can’t ignore a sense she somehow needs him. When he returns in daylight, she is nowhere to be seen – and neither is the cottage.

The Scratch is as up-to-date as tomorrow’s headlines. Clare and Gerald live an apparently perfect life in the Forest of Dean – Taylor’s own locale – with their strange black cat, Cannop. Jack, Gerald’s young nephew, comes to stay to recover from PTSD after active service in Afghanistan. Apart from a scratch that refuses to heal, he seems outwardly untouched, but he cannot get on with the cat. He becomes obsessed with local stories of ‘big cats’ roaming the forest and as the scratch begins to fester, Clare and Gerald’s own lives disintegrate.

Each of these subtle and haunting tales is well-crafted and beautifully written. The eerie Edwardian Christmas, the mind-bending Suffolk time warp, or the brooding contemporary tale of obsessions are utterly convincing in their normalcy. Yet each, partly due to the magnificent depicted settings, produces unexpected twists. Anyone who has spent nights in the dismal fens around Ely, on the raw and inhospitable North Sea coast of Suffolk or the dark and oppressive Forest of Dean will know that feeling of unease, of being watched by something just outside your own vision. Taylor won’t scare you outright. But he brings each story to a more or less satisfactory conclusion while still managing to keep the ending ambiguous enough to leave his readers thinking.

This is a fine example of true Gothic writing and well worth the read. But if you’re on your own keep a glass of something strong to steady your nerves. You may need it!