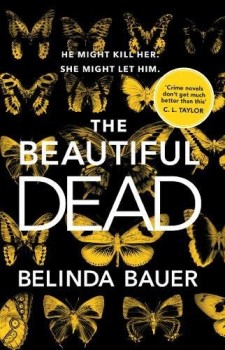 Eve Singer, crime correspondent for iWitness News, needs murder: it pays the bills. For the killer who stabbed Layla Martin to death behind a glass door, murder is his art. Eve would say they are worlds apart. The killer wouldn’t.

Eve Singer, crime correspondent for iWitness News, needs murder: it pays the bills. For the killer who stabbed Layla Martin to death behind a glass door, murder is his art, his passion. Eve would say they are worlds apart. The killer wouldn’t.
He would say his obsession with Eve, which starts when she unwittingly reaches out to him to protect her, is a collaboration. As his gruesome art exhibitions grow in number, Eve is torn between doing right and wrong, for the killer’s victims, her job and her father.

Although this is written in the third person, The Beautiful Dead reaches so convincingly into the minds of Eve and the killer that it is an intimate read. The plot is relatively simple, to the point of the storyline being somewhat weak, but Bauer more than makes up for this with her brilliant portrayal of the various relationships and her attention to detail.

In the first few pages, it would be easy to foster a dislike of Eve, until the reader finds out her motivation; paying the bills so Duncan, her father, can be cared for. Duncan is an Alzheimer’s sufferer, and Bauer gives us a convincing and poignant picture of his behaviour, random thoughts and difficult relationship with Eve. Of course, Eve isn’t pearly white; she allows herself to be put-upon by her sexist boss, and desperately wants to outdo her competition, Guy Smith from News 24/7. But how refreshing to read about a reporter who isn’t a stereotype, who doesn’t live in the lap of luxury, and who hasn’t even got a boyfriend let alone a high-flying partner!

Belinda Bauer has a way of making her characters flawed but likeable, perhaps because their behaviour and introspections, at times verging on hilarious, are believable and relatable. As the daughter of an Alzheimer sufferer, I had a few wry smiles throughout the story.

But what suspended my disbelief higher than the Post Office Tower was the attention to descriptive detail. I’ve recently spent a few days in Isleworth, so Bauer’s reference to the planes coming into land, causing rhythmical interruptions to conversations, along with the quiet streets and middle-class, semi-detached houses, provided sparing but utterly convincing proof of milieu. This may seem incidental, but on the opposite side of the fence, there is nothing more likely to break the suspension of disbelief and have the reader questioning the whole of a story than glaring mistakes. Equally so, this story shows a sadly realistic aspect of today’s society, where everything finds its way onto film via the things surgically glued to most people’s hands.

I enjoyed Eve’s realistic behaviour; while she might have behaved like a reporter without a conscience in the early part of the book, overall, she reacted like a normal human being. She did get the police involved. She did ask for help. She didn’t step too far out of character, and still managed to be a worthy protagonist. I was less convinced by the killer, though. His introspections and motivation came across as rather overdone and laboured.

Whilst lacking in twists and intrigue, The Beautiful Dead is an accomplished, rounded thriller which gives the reader so much more than crime. The added undercurrents of dementia, workplace sexism and a woman scared to embark on any relationship take the reader on a fulfilling journey.