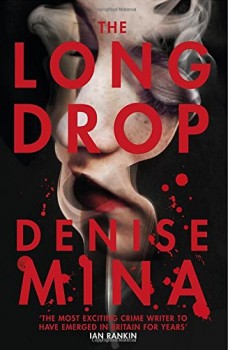 William Watt, a Glasgow businessman widely suspected of murdering his wife, daughter and sister-in-law, has arranged a meeting with a known criminal, Peter Manuel, who claims to have information that will establish Watt’s innocence.

The dust jacket states that this novel is ‘based on true events’. The main events are not only true but also infamous - and they are gruesome. Peter Manuel (the ‘beast of Birkenshaw’) was tried at the High Court of Judiciary, Glasgow in 1958, charged with eight counts of murder, on seven of which he was found guilty. Nobody in Scotland - and particularly in Glasgow – will ever forget the horror and the shame that the serial killer’s crimes aroused.

Denise Mina’s account of the man and the murders he committed is semi-fictionalised and is built around William Watt, a man who had originally been suspected of three of the murders – those of his wife, his daughter and his sister-in-law.

The novel begins with a meeting which had been requested by Peter Manuel, a well- known criminal. He has asked Laurence Dowdall, a solicitor who has acted for him in the past, to make the arrangements for him to meet William Watt. Dowdall had acted as Watt’s solicitor when he was being questioned by the police about the murder of his family and still feels a certain responsibility towards him. However, he realises that what Manuel might say could cause him embarrassment and he decides to leave the two alone.

What they do and say after the departure of Dowdall is purely conjecture on the author’s part. It is based on hints taken from questions asked by Manuel when he was conducting his own defence and cross-examining witnesses. Mina suggests that he put a proposition to Watt that he would perform a service for him in return for money. However, this is in the context of a very drunken evening in which the pair move from one disreputable drinking establishment to another. It is rather difficult to believe that they would have spent so much time merely drinking when Watt, assuming he was innocent, desperately wanted to get hold of whatever information Manuel had with a view to clearing his name.

What the reader remembers most clearly from this debauched evening is central Glasgow itself - the smoke-blackened buildings, the countless drinking dens for which even the term ‘bar’ is too good, and the gambling clubs. This is a city in which men who leave a bar when it closes for the afternoon, simply hang round outside until it reopens. All of this was, within the space of a few years, to come to an end. Large sections of the city will be demolished, having been condemned as unfit for human habitation, and people will be removed to the outskirts. This, however, is still to come and the Glasgow portrayed here is the old city, devoted entirely to commerce and with no consideration whatever for the unfortunates who populated it. The picture is completed by the inclusion of historical figures like the gang boss, Dandy McKay, and Billy Fullerton, known for his use of the razor as a weapon – monsters in a heartless, brutal environment.

It is almost a relief to get indoors during Manuel’s trial, but even here there is no relief from the immorality of the city. Witnesses lie or prevaricate and everybody knows they are doing so. Apparently, the judge complimented Manuel on his skill in defending himself, but from what we read here it is difficult to see why. He rambles and bores everybody to death, asks questions that seem to lead nowhere and generally behaves with the utmost stupidity. His only aim appears to be to draw attention to himself, whatever the outcome. One can only imagine the lawyers whom he loftily dismissed from his case silently congratulating themselves on their good fortune.

It didn’t make any difference in the end how his defence was conducted because, according to the law at the time, there was only ever going to be one outcome. Nor is there any suggestion in the book that it wasn’t the right one.