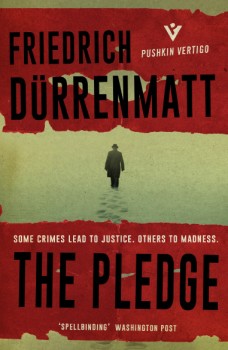 A detective becomes fixated with a serial killer of young girls, and sacrifices his career and mental health in an attempt to bring the man to justice.

The story is narrated by the writer of detective stories, who is in an obscure Swiss backwater to give a lecture. In the course of a lift offered by the Chief of Police, he is made aware of an old and apparently disturbed man who was once a top detective. The Chief then goes on to describe the details of the case which were the cause of his breakdown.

The key events started some nine years earlier: a travelling peddler reports coming across the body of Gritli Moser, a third-grade schoolgirl, murdered with a razor. The body lies at the edge of a village; people were around but nobody saw anything significant. The villagers’ rage soon settles on the peddler, however, the only stranger known to be around. The police put the pressure on and after a few days extract a confession.

The peddler’s suicide shortly thereafter seems to confirm his guilt, and everyone is satisfied but Matthai, Chur’s top investigator. For him, the true murderer is still at large: the crime has close parallels with two others for which the peddler could not have been culpable, and Gritli left some drawings of ‘the hedgehog giant’ who had been visiting her, clearly not the diminutive peddler.

Matthai is about to depart on an enviable contract he has been offered with the Jordanian police, but abruptly abandons this to pursue his plan to catch the killer. He buys a gas station on the main road through the district, hires a housekeeper whose daughter Annemarie resembles the previous victims, and keeps a close eye on her. He is convinced his preparations will shortly lead to arrest, and when Annemarie mentions ‘the wizard’ who brings her chocolate, he knows he is on the verge of success.

This is one of a series of re-issues by Pushkin Vertigo of works of crime fiction by authors perhaps not so well-known in English. The few I have read have always had something of interest about them, and so it proves here. This is Dürrenmatt’s most famous novel and reflects his rejection of the logical crime story of the time (1950s) where the rules of the game move inevitably towards the criminal being apprehended and justice triumphant.

In fact, the most jaw-dropping thing about the tale is Matthai’s easy recruitment of Annemarie and her unwitting mother as bait in his scheme. The obsession of the detective and the pressure he comes under when he fails to make an arrest seems less surprising. No one who saw George Oldfield, leader of the long-thwarted ‘Yorkshire Ripper’ enquiry in the 1970s, could fail to doubt the pressure which comes to bear on detectives who fail to get results in high-profile cases.