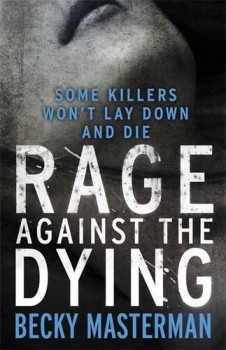 Rage Against the Dying

Retired FBI agent Brigid Quinn is trying to build a life apart from the human trafficking and sex predators she acted as bait for in her undercover career, but she is dragged back into this sordid and brutal world when a man confesses a notorious string of sex killings – including the murder of a young agent she had trained.

Brigid Quinn is the latest in a long roll-call of the ultimately righteous but seriously flawed law enforcement officers that play such a large part in crime fiction, and in many ways she is a great deal more interesting than her male counterpart. After nine years as an undercover FBI agent acting as bait for human traffickers or sex predators she has left, leaving behind two pieces of unfinished business: her failure to catch the Route 66 serial sex murderer and the presumed death at his hands of the young agent she trained to replace her.

After a series of failures in her personal life, she has met and married the man she believes could be her perfect partner, a former Catholic priest, and is trying to conceal her past and live what she believes to be a normal life in Tuscon on the edge of the Arizona badlands. When her protégé’s alleged killer is caught and confesses the Route 66 crimes, she is dragged back into the case. She becomes convinced that despite all the evidence the man in custody is the wrong one. A series of attacks on her reinforce her views, take her far outside the law and lead to both a crisis in her relationship and a bloody shoot-out.

The plot is dense, clever and well thought out. But it is Brigid herself who grabs and holds the interest. A mass of contradictions, she is a psychiatrist’s delight – and it is these contradictions which make her leap off the page. Becky Masterman is a new name on the thriller scene, but one we will no doubt hear a great deal more of. Her knowledge of procedure is impeccable, her dialogue crisp, her supporting characters real, her understanding of Brigid’s tortured character cleverly developed and hugely impressive, and even some fairly graphic recounting of necrophilia, mummification and serial sex killings serve only to build tension rather than revolt.

Masterman’s debut offering does exactly what a thriller is supposed to do – keep the reader fascinated through powerful and believable characterisation in a story that scarcely draws breath.