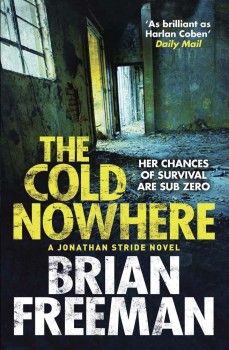 When teenage streetwalker Cat arrives at Lieutenant Jonathan Stride’s home drenched, covered in blood and begging protection from an unknown killer, the detective is plunged back in time to the killing of her mother and his discovery of a terrified six-year-old child.

Jonathan Stride fans worldwide will be thrilled by the Duluth detective’s return in what is very much a back to the future episode from one of the better writers of psychological suspense novels. The past – and Stride’s own part in it – holds the key to both the present and to his future and that of those nearest to him.

When he finds a soaked, bloody and terrified teenage hooker hiding in his house, Stride is plunged back ten years to the first time he saw the girl when he investigated the brutal murder of her mother and her unstable father’s subsequent suicide. Her story, that she is being pursued by an unknown killer, strikes a chord with the veteran policeman who offers his protection, but his partner and former lover, Maggie Bei, is not so sure about a clearly damaged girl who sleeps with a knife under her pillow. As they investigate her story further they uncover their own failure to recognise a series of killings going back for more than ten years, political corruption and cover-up, and in a dramatic climax find their own lives are in danger.

But this is no crash-bang thriller. Brian Freeman has made a name for his careful building of stress and tension and his insightful psychological portraits of his major characters.

That attention to detail is again obvious – and should drag in new readers eager to discover what makes Stride tick and follow his sometimes almost chaotic processes of detection all set amid the paranoia and isolation of small town America struggling to come to terms with the aftermath of recession. Duluth, a failing steel town and port on the Great Lakes, is hardly the most glamorous setting for a detective story and Freeman exploits this with a ruthlessly downbeat style which accurately captures both town and times and puts some fairly explicit and brutal descriptive writing into a realistic and believable context.

Stride himself remains an enigma, devoted to his work, fiercely supportive of his colleagues and fearless in his prosecution of a case. At the same time he is almost pathologically unable to commit on a personal level, uncertain and frequently indecisive and it is those all-too-human failings, which this story forces him to face. If you haven’t come across him before, he’s well worth a read – a very different sort of policeman – and if you like your crime hard and brutal there’s plenty of graphic action.