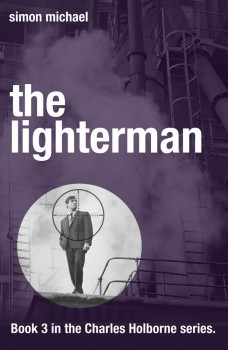 Barrister Charles Holborne takes on the defence of his cousin Izzy, a river lighterman accused of murder, but finds the job complicated by the enmity of Ronnie Kray.

This is the third outing for Charles Holbourne, an East End Jew who turned his back on his faith and has been rejected by his family ever since. By 1964 he is achieving recognition as an advocate, although his background and success does not make him universally popular in chambers.

He is in court one day when he is saddled with a dock brief, which gives him minimal time to fight an accusation of murder against an unseen client. To his surprise, the defendant is Izzy, a cousin with whom Holborne worked on the Thames in his youth. Izzy has been manoeuvred into his predicament by Ronnie Kray, who hates Holborne and has arranged for Izzy to be the instrument of his revenge.

Although Holborne and Izzy have lost touch, they still have a strong bond from their teenage years and Holborne is determined to help. But Izzy has made a confession to a waterguard, one of the customs and excise officers that oversee the movement of dutiable goods on the river. To give Izzy a chance, Holborne will have to cross the boundaries of appropriate behaviour for a brief. And even if he gets Izzy off, Ronnie will still be there, waiting for an opportunity to take Holborne down.

This is an excellent thriller, with the Kray twins providing a palpable sense of menace in the background, great action on the river and some gripping courtroom drama. The tale is told in the present tense, including the brief interludes of backstory set during the blitz when his family have a narrow escape, and subsequently when Holborne is living with his uncle and cousin and working on the river, before being dragged home by his father to pursue a more respectable career.

In reviewing the first in this series I felt that Holborne did suspiciously well for someone who had spent ten years shuffling paper, but the revelations here about his years working on the river, his boxing success as a junior and continued training make his fitness very plausible.

Holborne’s romantic life has also undergone a change. The murder of his wife Henrietta was the subject of his first appearance, The Brief, and the accusation against Holborne looked plausible partly owing to her being liberal with her favours and the relationship having cooled. So it is surprising, a year after these events, to find her in Holborne’s head giving advice, especially when he has a real-life girlfriend.

In any event, relationships are neatly resolved by the end of the book, and progress is even made with his estranged family. In contrast, the Krays have not been placated, and look likely to provide plenty of scope for the sequels.